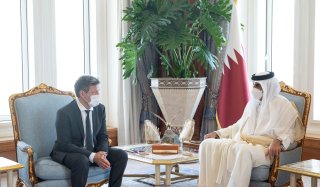 German officials announced on Sunday that Berlin had entered into a “long-term energy partnership” with Qatar. Germany’s partnership with the small Arabian emirate with vast natural gas reserves will serve as a counterweight to its historic reliance on Russia to supply the country’s energy needs.

German economic minister Robert Habeck met with Qatar’s emir, Sheikh Tamim bin Hamad al-Thani, and other high-level Qatari officials on Sunday to discuss energy ties and other ways to improve bilateral relations, according to a government statement. A German spokesperson said that a deal had been reached between Qatari gas suppliers and German energy companies, with the two sides entering into contract negotiations.

Qatari leaders said they viewed the development positively; the government noted that it had pursued closer energy relations with Germany for decades, but energy discussions between Doha and Berlin had never led to any firm agreement. Qatar has the third-largest natural gas reserves in the world, after Russia and Iran.

The Qatari statement also said that Germany had indicated its growing interest in receiving “liquefied natural gas” (LNG), which is far denser than gaseous hydrocarbons and is usually used for shipping on tankers. Qatar has been a pioneer in LNG transportation. German chancellor Olaf Scholz announced the construction of two large LNG terminals in the cities of Brunsbuttel and Wilhelmshaven in February as part of an effort to diversify its gas supplies in response to Russian supply risks.

Russia, which supplied a large amount of Europe’s gas needs prior to Moscow’s invasion of neighboring Ukraine on February 24, has seen its economy severely impacted by a raft of international sanctions from North American and European states. One of the most significant sanctions came from Berlin, which shut down the prospective “Nord Stream 2” pipeline between Ust-Luga in Russia and Greifswald in northern Germany.

Germany’s foreign policy has also sharply shifted in the aftermath of the invasion. Since 1945, Berlin has prioritized diplomacy over military posturing, and it emphasized cooperation with Russia as Moscow positioned its troops along Ukraine’s borders. It also sharply restricted its military aid abroad; Ukrainian officials and commentators mocked Germany for sending helmets to Ukraine’s army when other Western nations sent weapons and protested when Germany blocked the transfer of German weapons owned by the Baltic states to Ukraine. In the aftermath of the invasion, however, Germany rapidly committed to increase its defense spending and began to supply Kyiv with lethal weapons and other equipment.