Ghost of AirLand Battle: Why the Army and Air Force Must Work Together (think Russia and China) 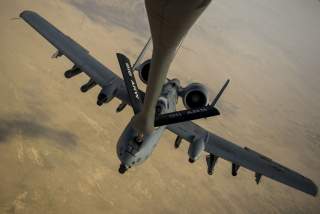 Back in 1982, when the West feared that hordes of Soviet tanks would bulldoze through the outnumbered NATO armies and gobble up Europe, the U.S. Army and Air Force grappled with how to stop them. They came up with a strategy called AirLand Battle, in which the Army ground units would maneuver around the clumsy Soviet columns like a matador around a bull, baffling and stabbing him on his flanks. While the Army held the front, the Air Force would be pounding Soviet depots, command centers and reinforcements in the rear, using the then-revolutionary smart bombs.

But a funny thing happened after the Cold War. The Army and Air Force went their own ways.

“The end of the Cold War removed the shared problem of a peer adversary as a scenario that required collaboration between the Army and the Air Force,” according to an essay by David Johnson, a retired Army colonel who is now a researcher at the RAND Corp. think tank.

“There was a vigorous debate over whether air or ground forces made the greatest contribution to Saddam Hussein’s defeat in 2003. As Iraq descended into chaos, the debate went into remission. Both Army and Air Force operations and thinking were dominated by the absence of a peer competitor, the demands of counterinsurgency, high-value target hunting, and the fight against the Islamic State.”

But the ghost of AirLand Battle is being resurrected by the Army through the new Multi-Domain Operations concept, which envisions joint operations across land, sea, air, space and cyberspace. Which means the Army and the Air Force are going to have to become friends again.

“To be successful, this new multi-domain concept will have to address the fundamental questions of each service’s culture and deeply held views about warfighting,” Johnson concludes.

Though the Army and Air Force are supposed to be on the same side, one could be forgiven for thinking they are competitors at best and enemies at worst (ditto for the Navy). The Army has always believed that wars could only be won by boots on the ground, while the Air Force believed that dropping enough bombs on the ground would induce the enemy to surrender. But for a time during the 1980s, the two services found themselves on the same page with the Army’s AirLand Battle concept, which gave both services a clear role while not getting in each other’s way.

Perhaps such an alliance was not meant to be permanent. After Desert Storm, the Army saw the Air Force’s role as supporting the ground troops. But subordinating a nation’s air arm to the ground arm is a fighting call to the Air Force, which was once a branch of the Army and fought hard to achieve independence after World War II. “In both Iraq wars, the Air Force believed that its operational and strategic air efforts were fundamental to the outcome, while the Army touted the centrality of ground forces in defeating Iraqi ground forces,” writes Johnson.

Meanwhile, technology meant that the Army didn’t have to rely as much on the Air Force by the end of the Cold War, as weapons such as surface-to-surface tactical missiles and Apache helicopters gave the Army its own long-range firepower (today the Army is considering howitzers that can shoot a thousand miles). As Army weapons reached deeper into the battle zone, the area the Air Force could strike independently of the Army shrank.

On the other hand, “momentary spurts of interservice angst, particularly on the part of the Army, also flared following operations in Bosnia, Kosovo, Afghanistan, and Libya, when air power advocates asserted that air attack, particularly when directed by special operations forces, could win wars independently,” according to Johnson.

Johnson fears that as the Army and Air Force switch from counterinsurgency to preparing for major-power conflict with Russia and China, interservice rivalry will reappear. Indeed, he believes that Multi-Domain Operations will prove harder to achieve than AirLand Battle.

For starters, AirLand Battle thrived because the Army and Air Force could focus on one enemy—the Soviet Union. But Russia and China are disparate foes. As in World War II, the Army is preparing for a European land war against adversaries such as Russia, while the Navy and Marine Corps prepares for a Pacific naval war against China. “With the addition of space and cyber to multi-domain warfare, the roles of the services in these two very different theaters will require extensive collaboration to design adversary-relevant concepts,” Johnson warns.

In addition, joint concepts will have to be worked in a consensus-based process between the services (Johnson laments the disbanding of Joint Forces Command in 2011, whose mission was establishing joint operations). “Absent JFCOM, it is not surprising that there is no joint force concept, much less a common lexicon, for multi-domain concepts. Instead, there are multiple competing concepts: Multi-Domain Battle, Multi-Domain Operations, Multi-Domain Command and Control, and Multi-Domain Maneuver, and more are likely in the offing as the services vie to solve challenges posed by Russia and China in ways that are in keeping with their respective service institutional ethos,” writes Johnson.

Nonetheless, “when the Army and the Air Force work closely to solve a shared problem—and derive mutually agreed-upon solutions—much can be accomplished.”