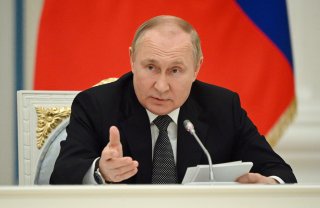 Russian leader Vladimir Putin announced on Thursday that he would host the African Union’s chairman, Macky Sall, to discuss rising food prices caused by the Russian invasion of Ukraine, as well as future collaboration between Moscow and the African bloc.

Putin is slated to meet Sall, who is also the president of Senegal, at his residence in Sochi, a Russian resort city located on the eastern bank of the Black Sea. The two leaders are slated to discuss “freeing up stocks of cereals and fertilizers,” according to Sall’s office, which noted that obstructions in global exports had “particularly affect[ed] African countries.” The statement indicated that Moussa Faki Mahamat, the president of the African Union Commission, would also attend the meeting.

In its own statement, the Kremlin reported that the Putin-Sall meeting would discuss “issues of Russia’s interaction with the African Union, including the expansion of political dialogue, economic and humanitarian cooperation.” The Kremlin also referenced discussions on “the current international agenda,” although it did not specify what would be included in these talks.

The sanctions imposed on Russia by the European Union, previously Russia’s largest export market, have pushed the Kremlin to seek other partnerships further abroad. One area of potential cooperation is Africa, which continues to import much of its food. As Russia and Ukraine are two of the world’s largest food producers, together accounting for roughly one-third of the world’s wheat exports, a Russian export chain to Africa could be highly lucrative for Moscow, particularly given the increase in food prices from the conflict and Ukraine’s inability to export most of its crop due to the Russian blockade of its Black Sea ports. Putin has claimed he is willing to lift the blockade on the remaining Ukrainian-controlled cities along the Black Sea if the European Union and the United States lift their sanctions—an exchange that is unlikely to occur.

While some African nations condemned Russia in the early hours of the invasion, and Sall has criticized the blockade of Odessa, Africa has remained divided in its responses to the Russo-Ukrainian War. In a United Nations General Assembly resolution in early March condemning the invasion, only Eritrea, an isolated authoritarian state sometimes referred to as “Africa’s North Korea,” openly voted to support Russia. However, dozens of other nations, including Sall’s Senegal, abstained or did not attend the vote.