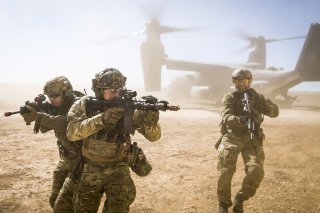 Given the last several decades of U.S. military war campaigns in Iraq and Afghanistan, many are likely to regard Special Operations Forces such as Navy SEALs or Special Naval Warfare units as primarily focused upon and experienced in counterinsurgency missions. While such a thought would indeed be accurate when it comes to the SOF mission envelope, war planners also see Special Operators as increasingly vital when it comes to the possibility of major-power maritime conflict as well.

This reality may in large measure be why a new U.S. Navy, Marine Corps and Coast Guard strategy document carves out a special place to highlight maritime Special Operations Forces as fundamental to the Navy’s pivot toward major power warfare.

Perhaps a small group of Special Operations capable Marines need to drop in behind enemy lines to gather intelligence or even conduct clandestine hit-and-run attack missions otherwise not possible.

Virginia-class attack submarines are also now engineered with a specific mind to supporting SOF missions; Block III Virginias, for instance, many of which are now operational, are built with what is called a Lock Out Trunk, an designated, separated area within the sub that can house small groups forces then fill up with water to enable SOF divers to quietly swim out of the submarine for stealthy reconnaissance or attack missions without needing to surface. This kind of innovation, which makes a certain kind of stealthy force insertion much more realistic and likely to favor success, seeks to leverage the training benefits and warfare skills unique to Special Operations Forces.