Why the U.S. Navy’s DDG 51 Flight III Destroyers Are Something Special 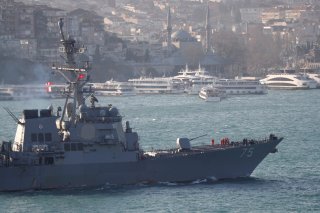 While the exact size and configuration of the future U.S. Navy fleet may still be somewhat in flux as a work in progress, the service is not slowing down on efforts to add new more-capable, heavily armed warships to the fleet.

The Navy has not only put as many as ten new high-tech DDG 51 Flight III destroyers on contract, but also continues to build new Flight IIA DDG 51s as well, ships which are being equipped with a new generation of radar technology, ballistic missile defense weaponry, and on-board electrical power to support emerging weapons such as lasers.

The new DDG 118, to be named USS Daniel Inouye, just completed what’s called Builders Trials, a series of in-port and at-sea demonstrations that allow the shipbuilder and the Navy to assess the ship and prepare it for operational service, deployment and, if needed, maritime warfare.

Aegis is an integrated sensor, radar and fire control system which has in recent years gone through a large number of software upgrades and enhancements to help Navy warships better detect and destroy incoming anti-ship cruise missiles, ballistic missiles, and other kinds of enemy attacks. Part of the systems being built into DDG 118 is a variant of Raytheon’s SPY-6 radar technology, an emerging threat detection system which incorporates exponential improvements in range and sensitivity. SPY-6 radar can find and track threat objects at twice the distances and half the size of current radar systems. Part of the rationale with these radar upgrades is to help streamline ship sensors and defenses to operate with a wider, more efficient threat detection envelope.

The next steps for the future USS Daniel Inouye will be to complete what’s called Acceptance Trials with the Navy’s Board of Inspection and Survey in 2021.