Grounded: This Defect Is Keeping F-35 Fighters on the Runway 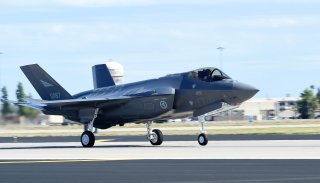 The U.S. F-35 stealth fighter—the most prolific fifth-generation stealth aircraft in the world—has a significant defect that could endanger the lives of pilots during combat. The issue is the explosive charge that propels pilots through the cockpit and away from the aircraft during emergency ejection.

A statement from the United States Navy explained the issue in a recently released press statement. “The Navy and Marine Corps are collaborating to quickly resolve the issue. The safety of Sailors and Marines is the top priority,” the statement noted.

The statement added that “only aircraft equipped with CADs within a limited range of lot numbers are affected. The CAD will be replaced at the aircraft’s assigned squadron and the aircraft will be inspected before its next flight.”

The statement further explained the following:

CADs initiate a series of automatic functions when aircrew pull the ejection handle to safely egress the aircraft and deploy the aircrews’ parachute. The CAD is inspected regularly, and replaced if needed, during period maintenance of the aircraft but can be affected by environmental and operational conditions.”

The issue does not only affect the United States F-35 fleet but potentially F-35s flown by allies all over the world. In addition to an increasing number of European nations, the F-35 is also flown by the Israeli military. In fact, the F-35s flown by Israel are quite unique—they are the only country within the F-35 program that the United States allowed to equip their F-35s with an indigenous Israeli computer suite, a measure that would allow the stealth fighters to operate more closely with Israeli munitions.

Indeed, the Israelis recently stood down all their fifth-generation aircraft to determine if their ejection explosives were also adversely affected by the manufacturing defect, adding another issue to the litany list of problems F-35 recipients have dealt with.