Heavy Armor Is Here to Stay: How the Abrams Tank Will Fight Tomorrow’s Wars 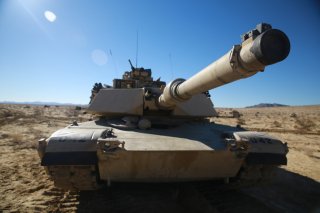 Although advancements in sensor and secure networking technologies and the advent of highly sophisticated autonomous and semi-autonomous drones have inspired the Army to engineer a new class of lighter-weight vehicles, the Abrams tank continues to offer capabilities that cannot be matched by other platforms.

In short, heavy armor is likely here to stay, at least for many years if not decades. Indeed, when it comes to any future military engagement, war planners will have to account for the fact that armored vehicles will face various kinds of increasingly lethal enemy firepower, including longer-range, more explosive anti-tank missiles; rocket-propelled grenades, enemy tank rounds, and a new generation of aerial threats such as drone-fired missiles or even drone swarms. Warfighters know that nothing can withstand an incoming onslaught like the Abrams tank.

The Army’s decision to spend billions buying the M1A2 SEPv3 Abrams main battle tank seems to indicate the service’s confidence in the platform, as well as an awareness that the service has no equivalent platform that can address these kinds of emerging threat dynamics—at least not yet.

These dynamics raise questions about what a future Abrams tank or replacement platform might look like, especially in a combat environment that will be characterized by high-speed, artificial intelligence-driven, multi-domain combat operations. This may explain why the Abrams v3 is heavier than the variants it is replacing.

In fact, the Army is already working with major industry weapons developers to engineer a new generation of faster and lighter-weight vehicles to fight alongside or fortify the Abrams tank and address its shortcomings. For example, there are some areas where an Abrams tank’s utility might be limited, such as accessing close-quarters urban areas or crossing bridges. But when the tank is supported by a new generation of overhead surveillance drones with mapping and sensing capabilities and seamlessly connected with infantry, tank crews can leverage these assets to identify an optimal avenue of approach. Also, by carrying upgraded weapons and utilizing longer-range and higher-resolution target identification systems, tank crews can provide fire support to infantry from expanded vantage points. Overall, all of this suggests that, even at a heavy weight, the Army is planning for a future warfare environment in which the Abrams tank maintains a unique, designated, and unparalleled place in the U.S. warfighter’s arsenal.

For example, there are many roads, off-road areas, or tough-to-transit locations that an Abrams tank equipped with added access to navigational detail and intelligence data will be able to find and access more quickly. Also, mechanized armored columns can also maneuver with a transportable bridge able to accommodate the weight of an Abrams, therefore enabling the tank to cross rivers, breaches, or some otherwise impassable areas.

Of course, while these new capabilities will be operationally useful, there is also the Abrams tank’s psychological deterrence factor: the sheer deterrent power of a Abrams tank, an intimidating vehicle whose warfighting prowess is well-known, could deter potentially aggressors and stop attacks before they happen. After all, part of the thinking with heavy armor and massive amounts of firepower is not just to win wars, but to be on the ground providing the presence that stops them from occurring in the first place.