Hitler Loved Them: These Are the Best Axis Handguns of World War II 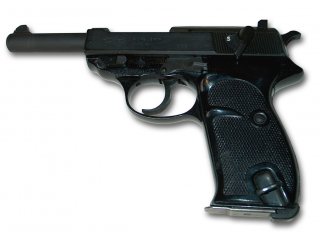 Germany produced some of the finest and most innovative small arms of the Second World War—from the MG-34 general purpose machine gun to the StG44, the world’s first assault rifle. In addition, Germany’s military was armed with some of the best handguns of the war—while Italy also produced its own notable sidearm.

Here is a recap of the best Axis pistols of the Second World War.

Germany’s infamous P1908 Luger remains perhaps the only side arm more iconic than the American Colt M1911 .45 pistol. It was actually developed by Georg J. Luger in 1898 and was an evolution of Hugo Borchardt’s C-93. Production of the Luger began in 1900, and the gun was primarily made by German arms maker Deutsche Waffen un Manitionsfabriken (DWM). It was originally chambered in 7.65x22mm Parabellum, but later modified to the more common 9x19mm Parabellum (now known as the 9mm Luger) cartridge.

The German military however was not the first to adopt the pistol, as the Swiss Army evaluated it, and adopted it as the standard military sidearm in 1900, followed by the German Navy in 1904. The weapon was even considered by the American Army briefly before DWM and the American testers parted ways. Finally, in 1904 it was adopted by the German Army and remained the official side arm until 1938, when it was to be replaced by the Walther P38. However, it was still in widespread use throughout WWII, when it became a prized souvenir to Allied soldiers. It remains one of the most collected military side arms today.

The name Walther PPK should sound familiar, as it is the handgun used by the fictional superspy James Bond. However, the handgun actually pre-dated the Ian Fleming novels by nearly two decades and was carried by German military officers as well as by members of the infamous Gestapo throughout World War II.

One major misconception is that the “PP” moniker meant “Pocket Pistol,” but in fact it was for “Polizeipistole” (Police Pistol); while the PPK was for Polizeipistole Kriminalmodell, meaning Police Pistol Detective Model, as it was issued specifically to plainclothes detectives. It is further worth noting that while the gun was used by Nazi officials, the PP was first released in 1929 and the PPK in 1931, years before the Nazi government even came to power.

Both versions are credited with being the world’s first truly successful double action semi-automatic pistols, and hence the action was widely copied—and used in the subsequent Walther P38. While the handguns were widely used throughout the war—and it was a PPK that was used by Adolf Hitler when the dictator took his own life—both versions remained in use after the war, and have seen numerous improvements. The PPK/E is the latest version produced and it entered production in 2000.

The Walther P38 first entered tests in 1938, when it was accepted as the replacement for Luger, but it didn’t enter widespread production until a year later. The handgun was originally meant to fully replace the older P08 by 1942, but wartime production never reached full capacity. The P38 relied on the standard 9x19mm Parabellum bullet, but other versions were produced in 7.65x22mm and even .22 Long Rifle, while experimental .45 ACP and .38 Super versions were also produced in very limited numbers. Originally the P38 was fitted with walnut grips, but as the war continued these were replaced with Bakelite grips.

Perhaps because of the reputation of the Luger, the Walther P38 was typically overlooked by American souvenir hunters and even gun collectors for many years. However, the handgun has become more popular with collectors today. It even remains in service with German police units now, which only has highlighted that the P38 was a reliable and worthy successor to the Luger.

Fabbrica d’Armi Pietro Beretta—or more commonly Beretta—is the oldest active manufacturer of firearms and components in the world. Founded in 1526, it has made weapons for every major European conflict since 1650. So, it shouldn’t be surprising that during the Second World War the firm supplied the Italian military with the Model 1934, a semi-automatic pistol that was chambered in the 9mm Coro round—more commonly known as the .380 ACP.

Beretta had only produced its first pistol during World War I, but by the 1930s had become the world’s largest pistol maker and the M1934 was the company’s most numerous product made during the conflict. It was designed and purpose-built for the Italian military and it is easy to see the influence from the German Walther PP pistols in this design. The model was followed by the M1935, which was similar in design, but fired the .32 ACP round. The M1935 remained in production until 1967, while the M1934 remained in service and production until 1991.

Browning Hi-Power (Belgium, but used often by Axis forces during the occupation)

The Hi-Power was actually based on the Colt M1911 design by John Browning and completed after the prolific arms designer died by Dieudonné Saive for Belgian arms maker Fabrique Nationale (FN). Unlike the M1911, it was chambered for the 9mm and featured a 13-round magazine. Interestingly the Hi-Power pistol was among the only firearm widely used throughout World War II by both Allied and Axis forces, with guns produced for the Germans at the FN plant in occupied Belgium. Those Hi-Power pistols were primarily issued to members of the Waffen-SS as well as the elite paratroopers—and those handguns were stamped with Wehrmacht inspection and acceptance marks.

This handgun was one of the most widely used military pistols after World War II and rumor has it that Iraqi dictator Saddam Hussein was known to carry one.