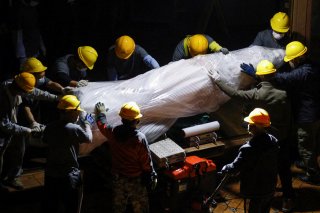 Lingnan University, a liberal arts college in Hong Kong, has removed its relief depicting the events of June 4, 1989, when Chinese troops put down a student protest in Beijing’s central Tiananmen Square and reportedly killed hundreds of protesters.

The Lingnan University Students’ Union Press Bureau reported that the installation had been blocked off on Friday morning, before being removed later in the day. A separate painting replicating the Goddess of Democracy, a statue erected during the protest, was also painted over.

The Lingnan University administration released a statement after the removals, indicating that they had been taken down in the “general interest of the university community.”

University officials claimed that they had “reviewed [and] assessed items on campus that may pose legal and safety risks to the University community,” according to the Hong Kong Free Press. “In the best interest of the University, items in question have been cleared, or removed [and] stored appropriately.”

The removal of the memorial at Lingnan University comes one day after a similar removal at the University of Hong Kong, which took down its Pillar of Shame depicting casualties from the June 4 incident. In a statement justifying the removal, University of Hong Kong staff claimed that it was “based on external legal advice and risk assessment for the best interest of the university.”

In the aftermath of the Tiananmen Square protests, many of the student protest leaders escaped into Hong Kong, which remained a British territory until it was handed over to China in 1997. At the time of the handover, Chinese leaders promised that Hong Kong’s freedom of speech and the press would remain intact, under the principle of “One Country, Two Systems.”

Chinese leaders maintain that these freedoms are still intact in Hong Kong, although the special administrative region’s electoral system has been changed to prevent anti-Beijing voices from gaining power. Earlier in the year, Hong Kong implemented a national security law, drafted in Beijing, that has been used to jail dissidents and shut down opposition protests; in June, the law was used to justify the closure of the annual commemoration of the Tiananmen Square crackdown, which had previously been held every year since 1989. Several pro-democracy activists were later arrested and charged when a small vigil was held in defiance of government orders.

The events of June 4, 1989 remain heavily censored in China.