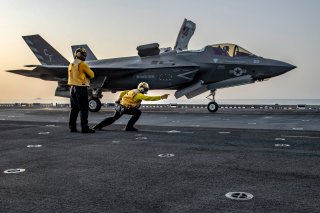 Attacking and destroying an enemy warship in the expansive waters of the Pacific requires advanced sensors, targeting, precision weapons, and, perhaps most of all, high-speed, multi-domain information sharing.

While the ultimate success of an offensive operation of this kind would likely lie in the effectiveness of the explosive, executing the mission would rely on multi-domain data analysis, organization, and transmission.

This is exactly what the Department of Defense sought to refine and enhance during Valiant Shield 2022, which is recently carried out in the Pacific. The exercise involved a live-fire “SINKEX” mission in which a joint task force tracked and destroyed the decommissioned USS Vandergrift frigate. The exercise, deemed a success by Pentagon observers, sought to assess and refine the kinds of emerging tactics necessary to prevail in the high-threat, high-speed maritime warfare environment.

“SINKEX featured a tightly synchronized sequence of live-fire events, demonstrating the joint forces' capability to deliver fires and effects in the maritime environment. This SINKEX provided the Joint Task Force the opportunity to test new weapons and communications technologies and rehearse the integration of cyber effects to conduct long-range, precise, lethal, and overwhelming multi-domain strikes against a surface target at sea,” said a U.S. Navy report on Valiant Shield.

From both a conceptual and operational perspective, a live-fire exercise like this aligns with the Pentagon’s Joint All Domain Command and Control (JADC2) initiative, which is intended to network the joint force through high-speed, artificial intelligence-enabled targeting and data sharing—all carried out at the “speed of relevance” to get ahead of an enemy’s decision cycle. The idea is to link stealth fighter jets, surface ships, drones, satellites, and ground forces to one another to shorten the “sensor-to-shooter” curve between otherwise separated domains.

Certainly, the ultimate destruction of the ship would relate to the weapon used, yet its success would rely almost entirely on data sharing, networking, and the presence of a robust, multi-domain information transmission apparatus. This is the primary thrust of JADC2, and it is part of why the U.S. military partnered with various industry weapons developers to take real-time maritime sensor data sharing to the next level.