Sensor Data Will Connect Navy Systems Across All Domains 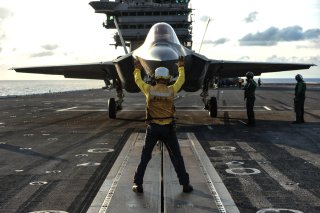 The U.S. Army, Navy, and Air Force all have key contributions to the Pentagon’s Joint All-Domain Command and Control (JADC2) implementation plan, which was just signed into effect by Deputy Defense Secretary Kathleen Hicks.

With the goal of multi-domain connectivity and high-speed targeting and attack across all domains, each service is developing common protocols, secure interfaces, and AI-enabled data analysis and information sharing. The Army seeks air-ground connectivity and synergies with the Air Force and Navy in order to develop unmanned systems, mechanized vehicles, and helicopters. In addition to connecting aircraft with unmanned support and command and control systems, the Air Force is achieving breakthrough successes in connecting aircraft with ground and sea systems. For instance, Marine Corps F-35s have already been able to connect with fast-moving Army units on the ground, exchanging time-critical navigational and targeting data in real-time.

Outside of connecting with the other services, the Navy is developing its own service-wide, multi-domain connectivity across its submarines, surface ships, and fixed-wing aircraft. Therefore, the Navy needs to connect its own systems across the air, sea, and undersea domains while also extending connectivity to Army units on the ground and Air Force units above.

Project Overmatch, a key part of the Navy’s contribution to JADC2, is an AI-enabled system that allows surface, undersea, and air assets to operate in close coordination with one another. This enables information sharing between overhead drones, ship-launched fighter jets, surface ships, unmanned platforms, and even submarines. The idea is to engineer multi-domain data sharing, which could, for instance, immediately link mine countermeasures with surface and undersea platforms in support of an amphibious assault.

Drones and fifth-generation aircraft could find threats from beyond the horizon, minefields could be found and neutralized ahead of incoming surface attacks, and unmanned systems could survey enemy coastlines to test defenses. Crucially, all of this could be done at the same time. Sensor data plays a key role in the Navy's multi-domain systems.

“The volume of information is only growing exponentially. With the sensors … the unblinking, all-seeing eye is everywhere. So we're awash in sensor data,” Lt. Gen. Dennis Crall told reporters in a JADC2 briefing. Crall is Director of Command, Control, Communications and Computers/Cyber and Chief Information Officer of the Joint Staff.

That is the idea, and the Navy has been making progress with this concept for many years now, in part through the Ghost Fleet Overlord program. The Ghost Fleet program has already demonstrated that it can enable multiple unmanned systems to operate autonomously and semi-autonomously in close coordination with one another. In addition to optimizing point-to-point connectivity and command and control, the program aims to develop a networked system of “meshed” nodes that operate in relation to one another, often without requiring human intervention.

These kinds of breakthroughs are being harnessed with Project Overmatch, the foundation of the Navy’s contribution to JADC2.