How the Air Force Could Turn Transports into Heavy Gunships 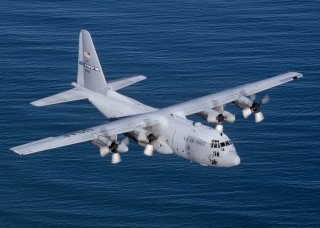 In an announcement, the U.S. Air Force gave an update about their palletized munitions concept, a project that if successful, could greatly expand the amount of firepower that the Air Force is able to bring to a war zone.

During the test, a Boeing C-17 Globemaster, one of the United States’ strategic and tactical heavy-lift transport aircraft, simulated the release of a palletized Joint Air-to-Surface Standoff Missile (JASSM). Palletized munitions are essentially missiles carried in transport cargo bays and strapped to wooden pallets, rather than carried in a bomber bomb bay, or of wing pylons. Using a transport’s cargo roller system, these “palletized” missiles are dropped out of the cargo area in much the same way as other heavy cargo can be launched from the rear of transport planes.

If successful, the palletized munitions concept could provide heavy-lift transports a powerful—and previously impossible—offensive ability. “A Palletized Munitions capability could enable various airlift aircraft to employ a range of weapons en masse via a self-contained, roll-on/roll-off palletized system, and may offer an alternative way for the Air Force to bring more mass to the fight,” explained Dr. Dean Evans, the Palletized Munitions Experimentation Program Manager.

The Air Force initiative could see cargo planes rapidly equipped with long-range standoff weapons and allow transports to act as precision bomber platforms in a pinch. Outfitting transports as bombers could be a logistical boon, allowing the flying branch to quickly increase the number of weapons that a sortie could bring to bear on a target.

The Joint Air-to-Surface Standoff Missile (JASSM) missile is an ideal candidate for palletized munitions. The stealthy long-range missile carries a large, thousand-pound warhead. The missile has been steadily improved since it entered service in the late 1990s, and one variant, the JASSM-ER (Extended Range) saw its range pushed out to around 575 miles, compared to the original JASSM’s 230 miles.

The latest variant, the JASSM-XR (Extreme Range) saw range pushed out even further to thousand miles, or about sixteen hundred kilometers. In addition, there is also an anti-ship JASSM variant that could bring a potent maritime capability to the Air Force if it too could be palletized.

Though still in its infancy, the Air Force initiative could be of crucial importance in scenarios defined by extremely long ranges—like a peer-peer fight in the Pacific, hypothetically speaking. Watch this topic for further future updates.