How the U.S. Air Force is Weaponizing Cargo Planes 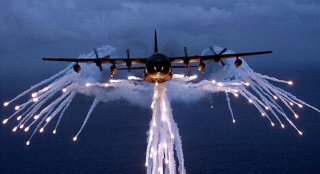 According to a U.S. Air Force press release, the military’s flying arm successfully tested dropping munitions from cargo planes back in January. The USAF flew an MC-130J cargo and tanker plane at a testing range in Utah.

The Air Force loaded simulated ammunition onto wooden pallets—or Combat Expendable Platforms as they’re termed—and dropped them off of the MC-130J in much the same was that supplies or other equipment is airdropped.

The Air Force released a request for information in February of this year that explained that anticipated adversaries would likely be China, saying, “The ability to mass firepower in future conflicts increases the range of OPLAN execution options against peer adversaries. Delivering standoff type weapons in mass, from non-traditional delivery platforms, is one potential option to deliver mass firepower and could prove pivotal in future conflicts.”

In future conflicts, the palletized ammunition delivery would augment the Air Force’ stand-off munitions delivery capability, by turning cargo planes into bombers. The Air Force termed the cargo/taker planes-turned-bombers concept “a bomb bay in a box.” The goal would be “where mobility aircraft air drop multiple, independent munitions from outside of a threat area could augment traditional delivery methods.”

Using cargo planes as bombers is part of the Air Force’ push for a force in which “large quantities of network-enabled, semi-autonomous weapons accompanies remotely piloted aircraft and fighter jets in combat missions.” It isn’t the first time that the Air Force has tried to dump huge amounts of munitions off the backs of planes though.

C-17 planes, also large cargo transports, could have the ability to drop off palletized weapons from standoff range in the future as well. Two types of cargo-turned-bomber would seriously augment the Air Force’ capability and bomber capacity.

Ultimately the tests were successful. All five CEPs tested successfully rolled off the MC-130J, and the simulated CLEAVER ammunition separated from the CEPs. The Air Force press release stated that they are ready to move to Phase II testing, where the “AFSOC will release CLEAVER glider vehicles, powered vehicles, and full-up vehicles with optional Warhead and terminal guidance.” Bombs away!