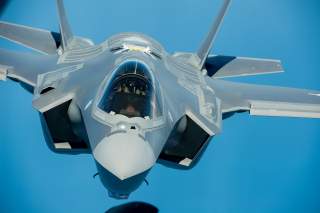 Key point: Subjecting the F-35 to a range of extreme combat circumstances has also been fundamental to F-35 SDD testing to ensure the aircraft could operate and fight while freezing or baking, test pilots said.

When a single F-35 used sensors, on-board computers and targeting systems to find, track and destroy two airborne drones at the same time with air-to-air missiles, the emerging 5th Gen fighter transitioned into a new era for offensive attack missions.

“Two AMRAAMs had multiple targets - to shoot two airborne targets simultaneously. It was a complex set up that happened over the Pacific. They were shooting at drones,” Lt. Col. Tucker Hamilton, F-35 Test Director, Edwards AFB, told reporters last year.

The test, which of course brings substantial tactical implications, was referenced as a decisive element of the Pentagon’s now completed multi-year System Development and Demonstration (SDD) test phase for the F-35.

The SDD phase completion milestone, which paves the way for accelerated full-rate production of the aircraft, lasted more than a decade – and included more than 46 weapons tests, Hamilton added.

“We needed to see if it could fly high and fast pulling 9Gs. We also conducted mission system testing of all the sensors which allow us to execute a mission. This included countermeasures, data-links, radar and weapons delivery accuracy to ensure that the F-35 can find, fix and track targets,” Hamilton said.

The technical advances with weaponry enables the now deployed F-35s to draw upon an expanded mission set should it engage in air-to-air combat; Air Force F-35As have recently been deployed near the Korean peninsula and conducted a series of combat preparation exercises with allies. Marine Corps Short-Take-Off-and-Vertical-Landing F-35Bs are now deployed to Japan.

Part of this can naturally be understood as somewhat of a deterrent against potential enemies likely to contemplate an air-to-air attack on an F-35. However, an actual air-to-air encounter, or dogfight, is not likely to be a frequent warzone occurrence should the F-35 wind up in combat.

The F-35 is engineered with an ability to dogfight and engage in air-to-air combat, yet it was also designed with an array of next-generation sensors designed to see, detect and destroy enemy targets from much farther ranges than existing fighter jets can. The concept is to find, see and eliminate enemy air threats well before the F-35 itself can be detected.

This is enabled, F-35 developers explain, with various sensor systems and computer algorithms. The aircrafts Distributed Aperture System (DAS) places 360-degree cameras around the aircraft to give pilots a long-range, comprehensive view of the surrounding threat landscape. DAS sensor data, combined with EOTS targeting information are integrated onto a single screen for pilots to analyze, through a computer-enabled process referred to as “sensor fusion.”

If pilots can complete the OODA loop more quickly than an enemy during an air-to-air combat engagement, described as “getting inside an enemy’s decision-making process, they can destroy an enemy and prevail. Faster processing of information, empowering better pilot decisions, it naturally stands to reason, makes a big difference when it comes to the OODA loop.

Subjecting the F-35 to a range of extreme combat circumstances has also been fundamental to F-35 SDD testing to ensure the aircraft could operate and fight while freezing or baking, test pilots said.

“The most surreal was taking the jet into the climatic chamber and freezing it down to 40 below and baking it up to 120-degrees Fahrenheit - all the while hovering an F-35 inside the hanger,” Billie Flynn, Lockheed Martin F-35 Test Pilot, said last year.

In fact, as part of the SDD, the F-35 Joint Strike Fighter fired an AIM-9X Sidewinder infrared-guided air-to-air missile for the first time over a Pacific Sea Test Range in 2016.

Designed as part of the developmental trajectory for the emerging F-35, the test-firing of the AIM-9X was intended to further the missile's ability to fire “off-boresight." This is described as an ability to target and destroy air to air targets that are not in front of the aircraft with a direct or immediate line of sight, JPO Spokesman Joe DellaVedova explained to Warrior Maven last year.

Previous test data and observers have confirmed the F-35 identified and targeted the drone with its mission systems sensors, passed the target ‘track’ information to the missile, enabled the pilot to verify targeting information using the high off-boresight capability of the helmet mounted display and launched the AIM-9X from the aircraft to engage the target drone, a statement from the F-35 JPO said.

Many of the JSF’s combat capabilities are woven into developmental software increments or “drops,” each designed to advance the platform’s technical abilities. There are more than 10 million individual lines of code in the JSF system.

Overall, the extensive SDD testing is intended to prepare for future iterations of the aircraft, to include the emerging Block 4.