How Sinai Peacekeeping Could Forge a Breakthrough in the Middle East 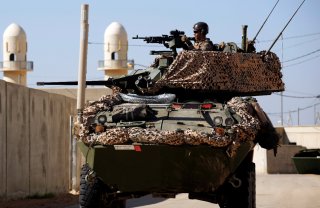 A decades-old U.S.-led peacekeeping mission with outposts on two small islands in the Red Sea is simultaneously a major stumbling block to the return of sovereign territory and the brick that could potentially pave the way for Saudi Arabia and Israel to normalize relations.

The Multinational Force and Observer’s (MFO) mission was established in 1981 to prevent the Egyptian and Israeli militaries from encroaching into the demilitarized zone of the Sinai Peninsula, following the signing of the 1979 Israeli-Egyptian peace treaty. The United States has always played a major role in the MFO and is regarded by both Egypt and Israel as its key member.

Now, there are reports that the United States is helping to negotiate the transfer of the Tiran and Sanafir islands to Saudi Arabia, which Egypt has protected on behalf of Saudi Arabia since 1950, but were demilitarized under the 1979 peace treaty. According to the international law scholar Askar H. Enazy, since Saudi Arabia was not a party to the 1979 treaty, “Egypt could not legally hand over the islands to the Saudis, even if it wanted to” without a trilateral discussion with Israel allowing Saudi Arabia to become a signatory to the treaty and take over Egypt’s obligations.

Once tensions simmer, these missions are historically undervalued as it is difficult to quantify their worth if there is no imminent crisis to defuse, and U.S. participation in the MFO mission has almost been ended numerous times throughout the last two decades despite the urging of both Egypt and Israel. However, as the peace treaty’s guarantor, the United States, via the MFO, may have a new role to play to ensure maritime security in the Gulf of Aqaba with two countries that do not have a history of security cooperation. Withdrawal from the mission would involve fiscal costs for the United States in the fight against terrorism and lessen its impact on regional diplomacy.

The global lesson from the United States’ experience with the MFO is to upgrade peacekeeping organizations to meet today’s challenges rather than retire them as they transition from post-conflict monitoring to peace maintenance, particularly when the impacted states see their value. In this case, the value may be a new breakthrough for stability in the Middle East.

In an article for the Middle East Institute, Amb. Gerald Feierstein boiled down the arguments to withdraw from the mission to either a belief that the MFO is no longer carrying out its initial mandate or that Egyptian-Israeli relations have improved so much that they do not need the United States to communicate. Both assumptions, he argues, are flawed, but more importantly, peace-keeping organizations should be built on, not eliminated, since conflict zones always present surprises.

In November 2014, Ansar Beit al-Maqdis — a Salafi jihadist group loosely affiliated with Al Qaeda — pledged allegiance to the Islamic State and declared the Wilayat Sinai, or Sinai Province. This group claimed responsibility for the downing of a Russian passenger jet that killed all 224 civilians onboard, murdered 235 people in an attack on al-Rawda mosque in North Sinai, and wounded four American service members in a separate roadside bombing incident.

With U.S. facilitation and Israel’s approval, the Egyptian military launched Operation Martyr’s Right from September 2015 to February 2018 in the demilitarized zone. The operation resulted in the death of 3,163 militants and included significant Egyptian-Israeli military cooperation. Reporters revealed that “for more than two years, unmarked Israeli drones, helicopters and jets have carried out a covert air campaign, conducting more than 100 airstrikes inside Egypt, frequently more than once a week — and all with the approval of President Abdel Fattah el-Sisi.” This kind of security cooperation was unheard of between the two countries and was confirmed by Egyptian president el-Sisi in a surprising interview with CBS in 2019.

The MFO played a vital role as interlocutor during Egypt’s anti-terrorism operation and even expanded its role to verify Egyptian and Israeli operations, which increased Egyptian forces in the demilitarized zone far above treaty limits. While the United States was busy combating the Islamic State in Syria and Iraq, aerial verification of Operation Martyr’s Right kept the United States from having to make a major investment in the Sinai campaign at the same time.

Gradually, U.S. personnel were reorganized to an efficient core of 450 from the Obama administration’s high of 725, and the United States was able to delegate counter-terrorism operation responsibility while maintaining a voice in the room. Annual funding for the MFO is $75 million, shared equally by the United States, Israel, and Egypt, and the United States’ contribution increased by only $6 million per year for a force protection fund, a bargain compared to the costs of conducting kinetic operations in another space.

As the administration continues to review global security commitments, peace-keeping regimes should be considered for the value they add for minimal investments. If a few million per year can help avoid major new military commitments, it is money well spent. Today, the possibility of a diplomatic breakthrough between Israel and Saudi Arabia has an institutionalized multinational force to manage the peace. The MFO mission continues to pay unintended dividends four decades later.

The challenges of maintaining maritime security in the Red Sea are different than in 1979 with new untested security partners, so the MFO mission, with the transfer of Tiran and Sanafir, may need an update too. Joint cooperation efforts, for instance, could coordinate search and rescue missions, combat piracy, promote the rational use of living resources, protect and preserve the marine environment, conduct marine scientific research, and eliminate illicit traffic in drugs. All these measures could be overseen by the MFO to smooth out any wrinkles between Israel and Saudi Arabia. No peace is promised. It must be nurtured and in this, the United States can play a distinctly positive role in the region.

Samuel M. Hickey is a Research Analyst at the Center for Arms Control and Non-Proliferation.