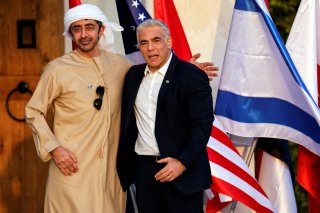 Diplomats from Israel, the United States, and four Arab nations—Bahrain, the United Arab Emirates, Egypt, and Morocco—met in the Negev Desert on Monday for a two-day summit intended to boost relations between the six states.

The American, Israeli, and Arab leaders collectively pledged to increase cooperation on security issues and expand their energy ties. They also agreed to work on bringing other Arab nations into the “Abraham Accords,” the groundbreaking August 2020 agreement that normalized ties between Tel Aviv and Abu Dhabi. The United Arab Emirates and Bahrain each participated in the signing ceremony of the Accords, which took place in September 2020 on the White House lawn and was overseen by then-President Donald Trump. Israel and Morocco normalized their relations months later, in December 2020.

“We are here today because we genuinely, sincerely, and deeply believe in peace,” Moroccan foreign minister Nasser Bourita said at the meeting. “Not that kind of passive peace where we turn our backs to each other and peacefully ignore each other … [but] a thorough, fruitful, paradigm-shaping, and value-creating peace in this region.”

Secretary of State Antony Blinken, who had arrived in Israel the previous day for independent discussions with Israeli leaders, praised the meeting as part of “a process that is transforming the region and beyond.”

“Just a few years ago, this gathering would have been impossible to imagine,” Blinken said, referencing the Arab states’ long-standing policy of refusing to recognize or negotiate with Israel. Although recognition had been extended by Egypt and Jordan prior to the Abraham Accords, the remainder of the Arab League had insisted on Palestinian statehood as a precondition for recognition—a condition that other Arab nations have insisted is necessary before recognition can be extended.

A normalization agreement with Sudan brought the total number of Arab nations that have normalized relations with Israel to six. Following an October 2021 military coup and continued protests against the new military government of Gen. Abdel Fattah al-Burhan, the legal status of Sudan’s relationship with Israel has been unclear, and the country was not invited to attend the summit.

Although Jordan was invited, the Jordanian government opted not to attend. Instead, King Abdullah of Jordan visited the West Bank city of Ramallah, where the Palestinian Authority is headquartered.

Although they have not dismissed the Palestinian issue altogether, the four Arab nations have sought closer ties with Israel largely as a counterweight to Iran, which each views as a significant regional threat. One topic of discussion at the meeting was the effort to reinstitute the 2015 Joint Comprehensive Plan of Action nuclear agreement with Iran, which the Israeli and Arab ministers noted would supply the Iranian government with billions of dollars that could then be used to fund Tehran-allied regional militias, such as Hezbollah in Lebanon.

On Monday, Blinken defended the agreement to Israeli foreign minister Yair Lapid, arguing that indefinitely cutting Iran off from the world economy was impractical and that a diplomatic agreement was the only effective way, short of military action, to ensure Iran would not develop a nuclear weapon.