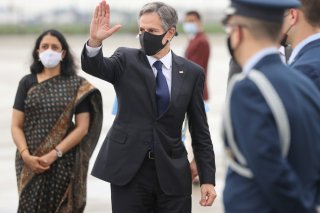 As Secretary of State Antony Blinken lands in Kuwait on Wednesday, he will discuss with senior Kuwaiti officials “a variety of different regional issues”—including Kuwait’s role in ending conflicts, bridging differences, and deescalating tensions—and will consult “closely on Iran, Yemen, and other regional issues,” according to Deputy Assistant Secretary for Arabian Peninsula Affairs Daniel Benaim. However, Blinken’s agenda appears to omit the best prospect for ending conflict and bridging differences: Kuwaiti peace with Israel.

As a candidate, President Joe Biden endorsed the Abraham Accords, which saw Israel sign peace agreements with the United Arab Emirates and Bahrain. Biden even promised to expand these accords, if elected. But earlier this month, according to the Washington Post, Biden told Jordan’s King Abdullah II that the Abraham Accords cannot serve as an end-run around a peace agreement between Israel and the Palestinians that would ensure Palestinian statehood,

The Biden administration seems to have reverted to the failed approach of making peace between Israel and the Arab states incumbent on settling the Palestinian issue first. Thus, in their meetings with Arab officials whose governments have not signed a peace agreement with Israel, Biden and his team have yet to bring up the subject of peace.

Last week, Blinken received Iraqi foreign minister Fouad Hussain at the State Department. During the media stakeout before the meeting, Blinken did not mention anything about the potential for Iraqi peace with Israel. Similarly, when Biden welcomed Iraqi prime minister Mustafa Al-Kadhimi to the White House on Monday, Iraqi peace with Israel was neither on the agenda nor in public statements.

But if Biden is serious about building on the momentum of the Abraham Accords, broaching the subject of peace with Israel should become one of his talking points with the fifteen member states of the Arab League that have not made peace with the Jewish state.

Except for Lebanon and Syria, the Arab governments that have yet to sign peace agreements have no outstanding border or refugee issues with Israel. Washington should view these states, particularly Kuwait, as low-hanging fruit that it can nudge to sign peace deals and give the Biden administration a historic diplomatic victory.

When Blinken and Benaim meet their Kuwaiti counterparts, they should make clear that Washington still strongly supports the Abraham Accords. When Kuwaiti leaders realize that peace is important to America, they will likely capitalize on their image as neutral regional peace brokers and join the Abraham Accords. On most other issues, America and Kuwait are already close allies and see eye-to-eye.

To be sure, Kuwait today seems far away from peace with Israel. Non-governmental organizations, mainly Islamist ones known for their donations to terrorist groups like ISIS and Al Qaeda, launched a donation drive for Gaza during the most recent war between Israel and Hamas in May. They collected $10 million in a few hours. The Kuwaiti government tried to keep tabs on the campaign by attempting to channel its proceeds to global humanitarian organizations. Verifying that no Kuwaiti money found its way to Hamas is hard.

Moreover, in the 1960s, Kuwait played an instrumental role in the rise of Palestinian nationalism. The late chairman of the Palestinian Authority, Yasser Arafat, and his closest lieutenants were residents of Kuwait when they formed their Fatah militia. However, Arafat benefited from Kuwaiti diplomatic support and generosity only until 1990, when he backed Iraqi dictator Saddam Hussein’s occupation and decimation of Kuwait.

The alliance between the United States and Kuwait became unbreakable as a result of the Gulf War, when Washington liberated Kuwait from the invading Iraqis, an event that reoriented the country away from Arab nationalism and removed a key obstacle to peace with Israel.

After liberation, Kuwaitis took their revenge on Arafat by expelling hundreds of thousands of Palestinians who had been working and living in the country. Since then, Kuwaiti zeal for Arab nationalism has receded, while Kuwaiti voices calling for peace with Israel became louder. Legislators, columnists, pundits, politicians, and TV anchors have all called for unconditional peace with Israel over the past few years.

However, when America did not grasp the opportunity after 1991, the rulers of Kuwait found in the Palestinian cause a useful tool to blunt opposition groups—especially the Muslim Brotherhood—that have been, since 1949, blaming the plight of the Palestinians on incompetent and complicit Arab rulers, who in turn show increasing aggression toward Israel to counter their opponents’ narrative.

If the Biden administration is serious about expanding the Abraham Accords, it has to show countries like Kuwait that peace is still one of Washington’s top priorities. Also of help would be for Washington to change its perspective on the Muslim Brotherhood, and to view it as a totalitarian cross-border organization rather than legitimate political parties acting independently and locally. The Brotherhood has been dragging many Arab governments into a perpetual state of war with Israel, a situation that helps transnational opposition like MB, but substantially undermines national interests like those of Kuwait.

It is very likely that the Kuwaiti government and its loyalists, most of whom are top regional merchants, will jump on the opportunity to sideline Islamists and endorse peace that benefits their businesses. What is still missing is for America to show these Kuwaitis that it is seriously pursuing such a plan.

Hussain Abdul-Hussain is a research fellow at the Foundation for Defense of Democracies, a Washington, DC-based, nonpartisan research institute focusing on national security and foreign policy. Follow him on Twitter @hahussain.