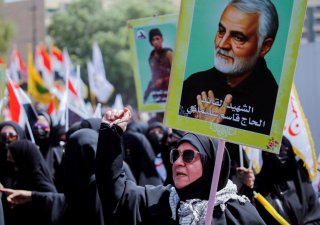 A year and a half after the United States assassinated the Iranian Quds Force commander Maj. Gen. Qassem Soleimani in Baghdad, the Islamic Republic of Iran continues to wield considerable influence in Iraq, and Iran-backed militias continue to violently pressure U.S. forces to leave Iraq. However, a closer look at the recent developments shows that Iran now faces a series of serious challenges that are directly and indirectly related to Soleimani’s death and seem to be limiting its influence in Iraq.

Soleimani was long considered to be the main architect of Iran’s regional strategy as he was in charge of commanding or coordinating a vast network of Iran-backed militias from Iraq to Syria and Yemen. He also enjoyed close ties with a number of regional politicians, such as Syrian President Bashar al-Assad and prominent Shiite figures in Iraq. As such, it should come as little surprise that his loss has faced Iran with increasing challenges in realizing its interests.

In fact, challenges to Iran’s role in Iraq did not begin right after Soleimani’s death, but they were already accumulating since 2018. In May of that year, the Trump administration launched its “maximum pressure” campaign against the Islamic Republic with the goal of countering Iran’s “malign influence” in the region. Washington also imposed sanctions on Iran-backed militia leaders in Iraq. By the end of 2019, tensions between U.S. troops stationed in Iraq and Iran-backed militias reached their peak. Although Donald Trump’s departure from power in January 2021 reduced the risk of a direct confrontation between Tehran and Washington, Iraq remains a scene of rivalry between the two hostile states.

Among the more recent challenges Iran faces in Iraq, geopolitical challenges are key. This refers to the role of Iran’s rival powers in Iraq and Iran’s efforts to contain their influence. Immediately after Soleimani’s assassination, Iranian officials, including Supreme Leader Ayatollah Seyyed Ali Khamenei, declared that “the expulsion of American troops from the region” had become a strategic goal for Iran. At the same time, the Shiite-dominated Iraqi parliament passed a resolution calling on the government to end the presence of all foreign troops in Iraq.

In practice, however, things did not go exactly as Iran had hoped. Although in March 2020, the United States began handing over some military bases under its control to the Iraqi government, it soon became clear that the evacuation of these bases was not a prelude to a complete U.S. withdrawal from Iraq. In April, the United States installed Patriot missile defense systems at Ain al-Assad airbase. A few months later, in February 2021, it was announced that Washington was developing the Al-Harir base in the Iraqi Kurdistan region.

In this context, Iran-backed militias doubled down on their attacks against U.S. positions in Iraq in order to put more pressure on Washington. From the first half of 2020 onwards, a range of new armed groups, believed to be backed by Iran and the Popular Mobilization Forces (PMF), began routine attacks on U.S. positions in Iraq to increase pressure on the Americans. The attacks, however, increased the risk of a direct confrontation between Tehran and Washington, leading to Khamenei reportedly calling for an end to the attacks in October 2020. The attacks intensified once again after Trump handed over the presidency to Joe Biden. Yet, Biden has shown no less of a commitment to countering Iranian influence, as he has already twice ordered strikes on the positions of Iran-backed groups on Iraq’s border with Syria.

In June 2020, a U.S.-Iraqi strategic dialogue began, one of the goals of which, according to Iraqi officials, was to discuss the withdrawal of U.S. troops. By January 2021, the number of American troops in Iraq had already dropped from more than 5,000 to about 2,500. However, when Iran seemed to be finally achieving its goal, NATO announced that it would increase its forces in Iraq from 500 to 4,000 at the request of the Iraqi government. Although the task of those forces is said to be to carry out training and advisory missions, Iran believes that the United States wants to continue its presence in Iraq under the cover of NATO.

What complicates the situation even further is the growing influence of Turkey and Saudi Arabia in Iraq. Since early 2020, Turkey has increased its activities in northern Iraq with the primary aim of fighting insurgents of the Kurdistan Workers’ Party (PKK). From the point of view of Iran and its allied groups in Iraq, Turkey’s ultimate goal is to dominate the Iraq-Turkey border zone. Disputes over Turkey’s plans for Iraq prompted Iran-backed forces to go to the brink of armed conflict with Turkey in March 2021.

Saudi Arabia has also expanded its relations with the Iraqi government. It seems that Riyadh is trying to contain Iranian influence in Iraq’s political, security, and economic spheres by establishing close ties with Baghdad. Iraqi prime minister Mustafa al-Kadhimi’s apparent intention to establish a balance in his country’s foreign relations by strengthening ties with Riyadh could help the Saudis achieve this goal.

Intensified geopolitical rivalries aside, there are also political challenges to Iran’s role in Iraq. Apart from his military tasks, Soleimani was also a charismatic and consensus-building figure who served Iran’s interests in Iraq in at least two ways: first, by making sure that the Iraqi government would not act against Tehran’s interests, and second, by mediating between different Shiite factions and preventing divisions among them.

When Soleimani was assassinated, Iran-backed Prime Minister Adil Abdul-Mahdi had already resigned due to the 2019 widespread protests but was still in office as a caretaker. Although Mohammed Tawfiq Allawi, the first nominee to succeed Abdul-Mahdi, was a favorable option for Iran, the lack of consensus among Shiite factions prevented Iran from publicly supporting him. The second nominee, Adnan al-Zurfi, was seen as a pro-U.S. figure by Iran and the Iraqi Shiite groups, whose prime ministership could jeopardize their interests. That was why, despite strong opposition from some Shiite factions such as Kata’ib Hezbollah, Iran eventually agreed to support Mustafa al-Kadhimi to become the new prime minister.

Ever since then, however, Kadhimi’s attempts to balance Iraq’s foreign relations, especially between Iran and the Arab states of the Persian Gulf, have caused irritation with the Islamic Republic. He also openly calls for maintaining Iraq’s close relationship with the United States. Kadhimi has also taken several measures to limit the power of the Iran-backed PMF, which is also a challenge for Tehran and its allies.

Meanwhile, since the beginning of 2020, disagreements within the PMF have been also on the rise. The PMF’s political leadership, including its chairman Falih Al-Fayyadh, has tried to present itself as committed to the law and obedient to the prime minister. In contrast, two powerful PMF factions, Kata’ib Hezbollah and Asa’ib Ahl al-Haq, have taken a hardline stance on government decisions, emphasizing armed resistance against U.S. forces. Tehran’s efforts to mediate between the leaders of the two factions and the Iraqi government have yielded few results. Meanwhile, in December 2020, internal disagreements caused four PMF brigades to split off and form a new structure called Hashd al-Atabat, or the Shrine Units. This was another blow to Iran’s efforts to maintain the unity of Shiite groups in Iraq.

What complicates matters even further for Iran is that some Iraqi politicians who were traditionally known as being close to Iran have also been diverging from Tehran. At the top of the list is the influential Shiite cleric Muqtada al-Sadr. Since Soleimani’s death, Sadr has not hesitated to openly criticize Iran’s actions in Iraq from time to time. Former Iraqi prime minister Nouri al-Maliki also appears to be gradually distancing himself from Iran. Supporting Kadhimi’s efforts to curb the militias, Maliki argues that “opposition to the US–Israeli–Saudi axis does not permit Iran to interfere in Iraq.”

The third layer of challenges to Iran’s role is of an economic nature. Increasing U.S. sanctions under the maximum pressure policy also affected Tehran’s trade relations with Baghdad. In this vein, Iran’s exports to Iraq decreased from $8.9 billion (March 2018 to March 2019) to $7.4 billion (March 2020 to March 2021). The Covid-19 crisis, which led to the closure of Iran’s borders for several months and the interruption of trade with neighboring countries, also contributed to the downturn. Iran’s frozen funds in Iraq have been another economic issue. By the end of 2020, Iran was not able to access an estimated $3.5 billion due to U.S. sanctions.

All this has happened while Iran’s rivals have been increasing their economic influence in Iraq. For example, the UAE’s exports to Iraq increased from about $11 billion in 2017 to $13.7 in 2019. During the same period, Turkey’s exports to Iraq also increased from about $9 billion to $10.2 billion. At the same time, Iraq’s dependence on gas and electricity imports from Iran has led some Arab countries to consider reducing Iran’s influence by offering alternatives to Baghdad. In November 2020, it was announced that Iraq would join a Gulf Cooperation Council electricity network linked to Saudi Arabia. Qatar has also expressed readiness to export gas (used in gas-fired power plants to produce electricity) to Iraq to resolve the country’s electricity crisis.