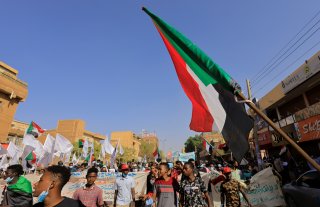 A new wave of demonstrations erupted across Sudan on Monday, as protesters renewed their demands for a reversal of the country’s October 2021 military coup and the restoration of civilian rule.

Monday’s protests were the latest incarnation of a months-long movement against the government of Abdel Fattah al-Burhan, the Sudanese military leader who currently chairs the country’s Sovereign Council. While Burhan was instrumental in longtime dictator Omar al-Bashir’s fall from power in 2019, he overthrew the transitional government of Prime Minister Abdalla Hamdok and seized power for himself two years later.

On Monday, Sudanese protesters chanted a demand that the military “go back to the barracks” in Wad Madani, a regional capital of around 300,000 residents located to the south of Khartoum. In the country’s east, groups of demonstrators insisted that a “civilian [government] is the people’s choice” and demanded an immediate end to military rule. Within Khartoum, hundreds of protesters converged on the presidential palace, leading security forces to use tear gas to disperse them, according to Al Jazeera.

Although the Sovereign Council—a joint military-civilian body established in the aftermath of Bashir’s ouster—nominally continues to operate, the military now controls the country’s affairs in practice. Earlier in February, Mohamed al-Faki Suleiman, a former member of the council who was dismissed and briefly detained after Burhan’s coup, was arrested again, eliciting further protests.

The coup led to international condemnation, both from the Western world and from Saudi Arabia and the United Arab Emirates—two historical Sudanese allies with strong links to Burhan. The coup was also followed by significant cuts to international aid for Sudan, with the United States freezing a $700 million aid package and the World Bank cutting off a lesser reconstruction effort.

The coup also led to protests within Sudan and retaliation by Sudanese security forces. So far, there have been at least eighty protest-related deaths and hundreds of injuries from clashes with the military. More than 200 dissidents have been arrested during the same period, according to a group of pro-democracy lawyers within the country.

Monday also marked the arrival of Adama Dieng, a UN human rights expert, roughly one month after Burhan’s government requested a delay in his visit. Dieng will evaluate human rights conditions in Sudan, meet with civilian and military officials, and author a report for the UN.