How Soviet Missiles Killed the XB-70 Without Firing a Shot 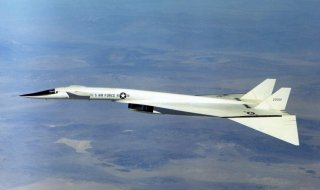 The XB-70 Valkyrie was a massive undertaking on the part of North American Aviation, which pitched the plane to the U.S. Air Force as a successor to the legendary B-52 bomber. At the time that the enormous supersonic bomber was proposed and designed in the 1950s, the emphasis in air war was firmly on the attacker. The general idea had not changed since the Second World War: bomber aircraft would fly into a hostile area, drop their payloads, and fly out as quickly as possible.

There were two existing defenses against such attacks: ground fire and interceptor aircraft. By the 1950s, direct ground fire, usually in the form of artillery “flak,” had proven to be nearly useless against high-flying and fast-moving aircraft. Interceptor aircraft fared somewhat better, and the emphasis in designing new bombers was to make them faster and therefore less vulnerable to interceptors.

In this role, the plane excelled. The XB-70 boasted six engines and, in spite of its enormous size, could travel at speeds of up to Mach 3.0, able to keep up with or outpace existing MiG fighters in the Eastern bloc.

However, cognizant of the West’s air superiority and its comparatively limited resources in aerospace design, the Soviet Union had by the 1950s begun to develop a devastating countermeasure: the S-25 ground-to-air missile defense system. While the XB-70 could easily outrun most interceptor aircraft, there was no chance that it could outrun a missile; that system’s effectiveness was further proven after the 1960 shootdown of U-2 pilot Francis Gary Powers over Russia, at a time when the XB-70 was still under construction.

Soviet missiles were further perfected by 1964, the year that the plane took its first flight; the plane had met its expectations fully, but its purpose had been rendered irrelevant. Although the Air Force attempted to neutralize the missiles’ targeting by flying the XB-70 at low levels, it quickly discovered that the XB-70’s performance in this role was no better than the B-52 it was intended to replace. So the Air Force discarded the XB-70 and kept the B-52, which continues to fly today—albeit with tremendous modern upgrades from its 1950s version.

Only two of the enormous XB-70 bombers were ever built. Of these, only one exists today, in the Museum of the Air Force in Dayton, Ohio; the other was destroyed in a mid-air collision in 1966.