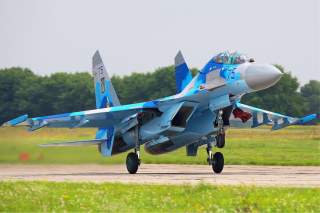 At 5:00 PM on October 16, a twin-engine Su-27UB1M jet fighter of the Ukrainian Air Force’s 831st Tactical Aviation Brigade smashed into the ground near the village of Ulaniv in western Ukraine.  According to a purported eyewitness account, the fighter entered an uncontrolled spin above the village, but the pilots adjusted its trajectory to crash in an empty field.

According to a post released by 144th Fighter Wing, the forty-four-year-old had flown F-16s for fifteen years before converting to the larger F-15Cs flown by the 194th Fighter Squadron.  The experienced pilot was serving as an aviation liaison officer for Clear Skies 2018, a two-week aerial exercise hosted by Ukraine involving over 950 personnel from nine countries.  The U.S. military's contribution included C-130J Hercules transports, six F-15Cs Eagles and a two-seat F-15D—the first deployment of Eagles to Ukraine in two decades. U.S. KC-135 tankers and MQ-9 Reaper drones based in Poland, as well as ground-based personnel, also participated in the exercise.

Most of the aircraft deployed to Starokostiantyiv Air Base, where Ukrainian counterparts had assembled a diverse fleet of MiG-29 and Su-27 fighters, Su-25 and Su-24 attack jets, An-26 transports, and Mi-8 and Mi-24 helicopters. Poland also sent its own F-16s to participate.

As is customary for such exchanges, Petrenko was taking his American counterpart on a spin to familiarize him with the Su-27 Flanker jets the Eagles would be flying with.  In fact, the Su-27 is very much the Eagle’s Soviet-designed counterpart, a large, long-range fighter capable of attaining very high speeds and carrying heavy payloads while remaining famously maneuverable.  A wide variety of Flanker models today constitute the top air-superiority platforms of the air forces of Russia, China and India.

The cause of the accident remains under investigation, though fortunately the flight recorder has been recovered.  The airframe involved, Blue-070, according to some sources was delivered in 1991, retired in 2009, reactivated in 2014 and supposedly inspected before the exercise. Petrenko was reportedly also a highly experienced pilot who had flown combat missions in 2014.

Ukraine in the past has suffered serious aviation safety mishaps, which may be linked to inadequate maintenance or a reputed culture of daredevil low-altitude flying.  On July 27, 2002, a Ukrainian Su-27UB performing at the Skynliv airshow near Lviv lost power and cartwheeled directly through a crowd, killing eighty-three spectators in the deadliest airshow accident in history.  The pilots successfully ejected and pled in their defense that they had been required to perform maneuvers they hadn’t adequately prepared for.

After the latest crash, the Ukrainian Air Force is left with seventeen Su-27s, in addition to twenty-one MiG-29 Fulcrums, a lightweight short-range tactical fighter comparable to the F-16.  It also can muster thirteen Su-25 Frogfoot ground-attack jets, a dozen Su-24 supersonic bombers, and forty-six L-39 jet trainers which can serve in the light attack role.  Kiev is doing its best to update these aging warbirds after neglecting the force for decades after the dissolution of the Soviet Union.

The impetus for modernization came in February 2014, when Russian special forces seized the Crimean Peninsula, and incidentally snatched forty-five of Kiev's MiG-29s based there.  When Russian-backed separatists subsequently ignited a civil war in the Donbas-region of Eastern Ukraine, Ukrainian aviation initially played an important role in the government's counter-attack.  Transport planes delivered airborne fighting vehicles, troops, and supplies to besieged airfields in Donetsk and Lugansk, Hind helicopters skimmed low over the earth to attack separatist positions, and Su-25s, Su-24s, and MiG-29s targeted rebel bases and convoys—and even tried breaking up roadblocks by buzzing them at low altitude.

However, the separatists acquired both man-portable and longer-range vehicle-mounted anti-aircraft missiles, and also benefited from coverage by Russian surface-to-air missile batteries and radars positioned along the border with Ukraine.   In four months, the Ukrainian Air Force lost ten helicopters, seven fighters, and attack jets and three transports to Igla man-portable SAMs, Buk medium-range missiles, flak cannons, and even air-to-air missiles reportedly fired by Russian MiG-29s.  As Russian weapons and soldiers poured into Eastern Ukraine that August, Kiev had to withdraw its Cold War aircraft by the end of the month to avoid unsustainable losses. Ukraine's warplanes lacked modern defensive countermeasures and longer-range precision-guided munitions to mitigate the threat.   They have not shown up over the frontlines since.

Kiev now seeks to prepare its air arm in case it ever engages aviation over the Donbas in the future—or worse, is forced to defend against a larger-scale invasion from Russia.  However, as Russia’s qualitative and numerical superiority is quite considerable, Ukrainian defensive strategy would be focused on making an invasion as costly, lengthy and risky as possible.

Ukraine does retain a large arms industry, including the Antonov aviation firm known for its transport aircraft.  It has modernized Su-27s and at least eight MiG-29s to the new Su-27S1M and MiG-29MU1 standard.  The MU1 features a new Omut defensive counter-measure device, a satellite navigation system, and a more powerful N019-19 radar with a forward search range of sixty-two miles.  In 2019, the MU2 upgrades will be phased in, introducing support for precision-guided ground-attack weapons, including the electro-optically guided Kh-29 missile and KB-500KR bomb.  While similar capabilities were introduced to Western fighters decades earlier, they should still give Ukrainian aircraft more usefulness on a modern battlefield.

Ukraine is also officially seeking membership in the North Atlantic Treaty Organization, and part of the courtship between the alliance and the Ukrainian military involves the latter transitioning to a Western-style command-structure, doctrine, and volunteer-based recruitment.  NATO trainers are heavily involved in many of these reforms, even though they remain distant from the frozen warzone on the Donbas.

However, Ukrainian entrance into NATO remains a remote prospect in the near term due to the ongoing conflict with Russia.  Kiev still hopes the closer it becomes to the alliance and the more its modernizes and professionalizes its military, the greater the uncertainty faced by Moscow if it contemplates escalating its presence in Ukraine.

Despite the tragedy marring the Clear Skies exercise in 2018, Ukraine will continue to seek more training, military hardware and diplomatic support from NATO members.  Ukraine has dispatched five officers to participate in ‘Trident Juncture'—the largest NATO wargame since the end of the Cold War, simulating a defense of Norway from a surprise invasion.