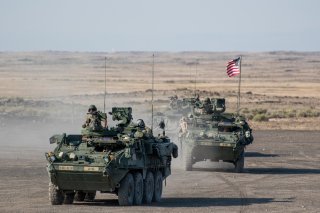 A U.S. Army armored vehicle typically has many “boxes” for sensing, receiving, fire control, computing, and data transmissions, yet they often perform disparate functions using different hardware configurations. This can become problematic, as time-sensitive combat data can be segregated or cut off between different boxes, sensors, or methods of analysis.  This means vehicle crews and combat decisionmakers can get blasted or overwhelmed with unmanageable streams of data critical relevance to the fight.

In recent years, the U.S. Army has vigorously worked to address this predicament and lessen the cognitive burden placed on soldiers in combat, freeing them up to focus on pressing variables in need of human attention. This involves lessening a “hardware” footprint and streamlining or analyzing different sets of information in relation to one another. Army scientists refer to this as “boxology,” a term referring to efforts to combine information gathering and processing “boxes” on a vehicle or platform. This can lower weight to improve speed and agility, while also opening up new, breakthrough avenues for information analysis and transmission. This process, referred to by Army leaders as data fabric, is part of a future-oriented technological modernization program called Project Rainmaker.  A new “boxology” can enable unprecedented levels of operational functionality.

“Our boxology is too hard to break apart. So now we'll break it down into more puzzle pieces that we can put together and fit them as such. So our soldiers in the future can come up with new methods of how they want to use information in a way they can, how they do decision support, how they do fires, how they do logistics, for instance, when a Data Fabric, you can be a fires system, shooting off artillery,” Alan Hansen, Deputy Assistant Director for Information Dominance, U.S. Army DEVCOM C5ISR, Army Futures Command, told The National Interest in an interview.

The success of the effort relates to messaging standards and formats, meaning the use of common analytical tools and gateway technologies to interpret, pool, and analyze otherwise incompatible streams of information.

With data fabric and Rainmaker, however, different boxes, combat functions, and information-gathering sensors can be integrated, combined, and processed simultaneously in relation to one another in a smaller “box” or form factor.