How the U.S. Army Is Testing Its New Mobile Protected Firepower Vehicle 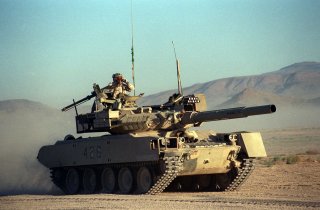 In the coming months, the Army will be firing guns, rockets and cannons at prototypes of the emerging Mobile Protected Firepower vehicle to prepare the fast-tracked platform for major mechanized warfare. The goal is to rival and outmatch Russian and Chinese light tanks with new levels of combined lethality, maneuverability and sensor-drone networking.

The test attacks on prototypes have included RPGs, crew-served weapons, small arms fire and various kinds of cannons and land-rockets. These experiments are intended to fully and accurately replicate combat as part of soldier “lethality tests” of its new MPF platform, senior Army weapons developers have described. Part of these assessments include move-to-contact missions, assault exercises, medium range fire on static and moving targets—and mobility tests across rigorous, uneven terrain. Army developers will also look at expanding the anticipated mission requirements for the MPF, to include counter-air attacks on enemy drones and helicopters, Army developers say.

“MPF has a large cannon that would be effective against rotary wing. That would be beneficial - we are going to look at it,” Brig. Gen. Ross Coffman Director, Next Generation Combat Vehicle Cross-Functional Team, told reporters last year during an earlier phase in the vehicle’s development.

Prototype Mobile Protected Firepower vehicles will soon be arriving through the Army’s Rapid Prototyping deal with BAE Systems and General Dynamics Land Systems. Each vendor will deliver 12 prototype vehicles for testing and development, a key step toward a 2022 “down-select” to one vendor and the eventual construction of 504 vehicles.

“The IBCT lacks the ability to decisively close with and destroy the enemy under restricted terrains such as mountains, littorals, jungles, subterranean areas, and urban areas,” the CRS report states.

The Army’s fast-tracked plan for the MPF requires a dual-pronged acquisition approach for the service, which wants to both harness the best available weapons and technologies today—while also engineering a vehicle to be successful in war 20-years down the road. While the testing and developmental assessments are intended to be thorough, the Army plan is to prepare the platform for war on a massively expedited time frame. This process is intended to circumvent some of the more lengthy and bureaucratic hurdles known to encumber the traditional acquisition process. For instance, as a way to make use of readily available technologies and circumvent certain lengthy acquisition milestones, the program will not have a formal Preliminary Design Review and Critical Design Review.

Designed to maximize deployability, the vehicles are configured such that two can travel on an Air Force C-17 aircraft; however, unlike the MPF’s air-droppable Russian counterpart vehicle, the U.S. Army wants to ensure a greater level of protection for soldiers. Given this, Army developers have explained that the MPF will not be airdropped to “seize” an airfield per se, but rather land and assist with ground combat-maneuvers.

The Russian 2S25 Strut “light-tank,” in service since 2005, is described as an amphibious tank destroyer designed to combine tank-like firepower with combat maneuverability—much like the U.S. Army MPF. However, the Strut is only 18-tons, and the U.S. MPF is expected to reach weights as high as 30 tons. This Army developers explain, gives the vehicle an improved blend of protection, armored firefight ability as well as unprecedented mobility for a vehicle of its kind. Interestingly, the Chinese Type 15 VT5 light tank, having emerged in just the last few years, is reported to be roughly 35tons with a 105mm cannon. The VT5 was shown publicly for the first time at a military parade in September of last year, according to a report from Army Recognition magazine.

Much like the Army MPF, the Chinese light tank is engineered to bring a mobile, expeditionary lethality to armored mechanized warfare without some of the restrictions associated with its larger T99 heavyweight tank. For instance, a M1A2 Abrams tank can typically be pushed to speeds just above 40mph—yet wheeled Strykers, Humvees and other combat vehicles can easily travel faster than 60mph. Therefore, engineering a vehicle which does not slow down a time-sensitive infantry assault is of paramount importance to MPF developers.

Lighter, air-droppable vehicles, while able to attack through a wider range of methods, are not well-suited enough for the combat missions expected for the MPF, service developers explained. Army program managers explain the vehicle as a platform which must “be able to withstand a certain threshold of enemy fire.”

“Russian forces enjoy a marked mobility advantage by combining expert railway operations, geographic proximity and lighter and less fuel-consuming platforms, which results in a rapid delivery of massed combat power, ready for high-intensity conflict at what amounts to a moment’s notice,” the Modern War Institute paper, titled “Light, Mobile and Many: Rethinking the Future of Armor.”

At the same time, rapid deployability and speed of maneuver are not, according to many U.S. weapons developers, at odds with high levels of survivability. Scalable armor, long-range sensors, Active Protection Systems and precision, heavy-weight firepower are all factors aimed at reconciling what might appear to be a contradiction. In fact, the West Point essay suggests that, given the advent of these new technologies, lighter weight combat vehicles with less armor might become even more important.