How the U.S. Navy Plans to Close Its ‘Strike Fighter Shortfall’ 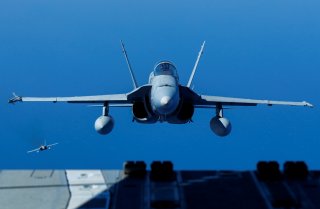 The U.S. Navy continues to struggle with a concerning strike fighter deficit due to decreased arrivals of new F-35Bs and upgraded F/A-18 Super Hornets, causing concern that the service may be ill-equipped for the possibility of great power war.

Certainly, any major engagement against China, for instance, would require the service to project and mass combat airpower across a wide operational area. Aerial nodes will also be in great demand when it comes to surveillance, targeting, and dwell time over high-value target areas.

“Both the Navy and the Marine Corps have reduced their requests for F-35 aircraft in fiscal years 2023. In addition, the Navy is not requesting additional Super Hornets. Can you explain how the Navy intends to make up its strike fighter shortfall?” Rep. Kay Granger (R-TX) asked senior leaders at a recent hearing on the Navy’s 2023 budget.

“We have a strike fighter shortfall that we're trying to close, and our initial goal was to close in 2025. That's now running behind, and the projection is, at least today, that we'll close that shortfall in 2031,” Chief of Naval Operations Adm. Michael Gilday told lawmakers.

Part of the solution to this, Gilday explained, is to expedite ongoing upgrades to the existing fleet of Super Hornets, which have already gone through a number of service life extension programs to ensure the aging aircraft can fly into future years and reach as many as 10,000 flying hours. The demand for extra F/A-18s has always been high, and the service has been working intensely with industry partners to offer a series of upgrades to the aircraft. Initially, the hope was to extend F/A-18’s flight hours from 6,000 up to 8,000, but operational demand and the success of the upgrade effort led to the current effort to reach 10,000 hours.

“It makes more sense to do that on existing airframes, to give them 10,000 hours with a more capable combat system, than it does investing in a brand new fourth generation aircraft,” Gilday told lawmakers.

Much has been done to the jet in recent years, including the addition of new avionics, infrared search and track target radar, quasi-stealthy conformal fuel tanks, and even a special software called “Magic Carpet,” which is intended to help pilots optimize approaches onto a carrier deck.

Navy budget requests from as far back as ten years ago regularly asked for more F/A-18s to fill a deficit caused by the F-14’s retirement and the continued development of the F-35C fighter. The Navy’s 2017 budget request, for example, asked for twenty-one new Super Hornets to be added through 2021 and fourteen more Super Hornets to be added to the “unfunded priorities” list for Congress. Both requests were part of a clear effort to bridge the gap until the F-35C arrived.