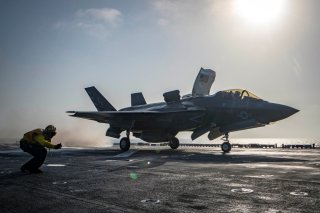 By simultaneously flying F-35C stealth fighters from two carrier strike groups in the South China Sea, the U.S. Navy is demonstrating its coordinated reach and ability to carry out high-tempo attacks in contested areas of the Pacific.

Sortie coordination is critical for these kinds of maneuvers. When takeoff and attack missions are synchronized, staggered, and integrated, the Navy’s power projection capabilities are enhanced. These capabilities are especially important in the Pacific, where land bases are smaller in size and separated by vast swaths of ocean. Crucially, launching 5th-generation stealth fighters from the sea places otherwise inaccessible areas within reach. Doing so also greatly increases the fighters’ “time on station” to make adjustments as new target information arrives.

In the context of the Spratly Islands, which are hundreds of miles away from many potential land-launch points for aircraft, this kind of operational reach will be critical. A carrier-launched squadron of F-35Cs, for example, could circle disputed, high-threat islands while conducting reconnaissance and even carrying out integrated attacks. Launching the F-35s from a carrier would enable the fighters to attack for an extended period of time without necessarily needing to refuel.

While there is a clear deterrence element to the Navy’s recent exercises in the Pacific, they also address the vital issue of forward presence. Should China move on Taiwan or conduct staging operations in preparation for an invasion, the U.S. Navy would want to be in a position to quickly respond. In order to prepare for this contingency, the Navy must be familiar with the region and confident in its abilities to conduct operations in the Pacific.

Even without a large land footprint in the Pacific, the Navy's fleet of carrier strike groups and ocean-launched F-35s will put the United States in an advantageous position. If U.S. carrier-launched F-35s were able to respond fast enough, they could intercept or even destroy a Chinese amphibious assault on Taiwan.