How Will the Taliban End? Remember the Khmer Rouge 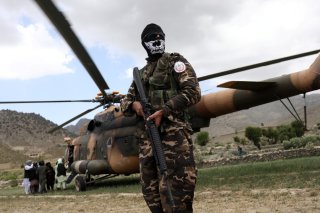 It has been almost a year since the chaotic American withdrawal from Afghanistan drew easy parallels to the U.S. exit from South Vietnam almost a half-century before. In Kabul, images of young Afghans, their promises betrayed, running after airplanes and some subsequently falling to their deaths were seared into the American consciousness, updating the iconic photograph of American government employees scrambling onto a helicopter as Saigon fell.

There were other parallels between America’s longest and second-longest wars. Politics and poor diplomacy rather than military defeat caused the United States to throw in the towel. Historians now understand the Viet Cong was far closer to the breaking point than contemporaries realized when Secretary of State Henry Kissinger negotiated the agreement that allowed North Vietnam to snatch victory from the jaws of defeat. Likewise, when Joe Biden pulled the rug out from beneath the U.S. presence in Afghanistan, the Pentagon had, for a cost not much larger than the U.S. presence in Japan and Korea, enabled a small American force to amplify Afghanistan’s army and enable it to keep the Taliban out of every district capital let alone Kabul. In the last eighteen months of the Trump administration, U.S. combat deaths in Afghanistan averaged less than one per month. What Biden and his National Security Advisor Jake Sullivan called “endless wars” had become, in Afghanistan, traditional deterrence.

The U.S. withdrawal from Vietnam was not the last chapter for Southeast Asia, just as the re-establishment of the Taliban’s emirate will not be the last for South and Central Asia. The Vietnam War destabilized the entire region. The Viet Cong’s infiltration of and establishment of supply routes in Cambodia and Laos precipitated a massive American bombing campaign. The United States dropped more tonnage of explosives on Cambodia than it had on Japan during World War II. The net effect was population dislocation across broad swaths of the country as well as political radicalization.

In the vacuum caused by the American withdrawal, the Khmer Rouge rampaged through Cambodia, ultimately sacking the capital Phnom Penh. They were every bit as ideological as the Taliban, with a hatred equally deep toward those they saw as cosmopolitan or corrupted by Western culture. And, like the Taliban who persecute the Hazara without mercy, the Khmer Rouge combined their ideological animus toward the West with more traditional racism, often targeting Cambodians whose blood they believed to be polluted by Vietnamese ancestry. The Khmer Rouge ultimately murdered almost two million Cambodians. In this slaughter, they were helped by the naïveté of some Western non-government organizations and self-described peace groups. The American Friends Service Committee, for example, sang the Khmer Rouge’s praises even as the genocide was ongoing. John McAuliff, who headed the Quaker NGO’s Indo-China division, dismissed reports of Khmer Rouge massacres a U.S. attempt to discredit “the example of an alternative model of development.”

Given the opportunity, the Taliban might do similar. Unfortunately, they will find no shortage of useful idiots who will rationalize Taliban actions and strip the group of agency in order to blame the United States. At the very least, the Taliban are, like the Khmer Rouge, quite incompetent. It is one thing to wage an insurgency and stymie the elected government’s efforts to develop Afghanistan; it is another to provide the most basic services. While the Taliban project an image of medieval moderation in Kabul, where some Western journalists still venture, all bets are off on the hardships to which they subject Afghans outside the cities and in areas inhabited by ethnic and sectarian minorities.

Often, Islamist movements thrive in the wake of earthquakes and natural disasters as their efficiency juxtaposes with ossified, bureaucratic, and incompetent government. The stature of the Muslim Brotherhood in Egypt grew greatly due to its efforts in the aftermath of the 1992 Cairo earthquake, for example. They rendered assistance without begging externally for international aid.

The Taliban’s botched response to Afghanistan earthquake relief, in contrast, shows how irredeemable and incompetent its movement is. Channeling aid to the group would be virtue signaling at the expense of ordinary Afghans. At best, it is like helping the arsonist put out a house fire while the forest around him burns on all sides. At worst, it would fund Taliban militancy as the group diverts the funds to those who meet its ideological agenda and prolong the curse that the Taliban represent for most Afghans. The West should do nothing to throw a life raft to a movement whose ship sinks as it obsessively drills holes in the hull.

To fund the Taliban now would be akin to pumping money into the Khmer Rouge for humanitarian relief after its government forced a famine in pursuit of ideological purity. Turning on the spigots of aid might make donor nations feel good, but it would provide no relief for people in need.

On Christmas Day 1978, Vietnam had enough of Khmer Rouge provocations and atrocities and invaded the country, forcing the Khmer Rouge government to flee. What came next did not solve every problem, but it did end the nightmare and offer Cambodia a new beginning. Nor was the Vietnamese invasion the only time a neighboring state’s army ended a murderous regime. In January 1979, a Tanzanian invading force moved into Uganda and pushed its dictator Idi Amin into exile.

Ultimately, the Taliban will similarly be a victim of its own ideological extremism. In 1999, the Islamic Republic mobilized for war with the Taliban after the group murdered several Iranian diplomats and intelligence officers in northern Afghanistan’s Mazar-e-Sharif consulate. Today, Iran is playing a duplicitous game with a foot in both the Taliban’s camp while becoming (alongside Tajikistan) a major benefactor of the resistance. At some point, however, the Iranians will likely have enough. At heart, the Taliban are ideological animals unable to hide their anti-Shia animus. They will act, if not against Iranian citizens themselves then against Afghan Shias. The Taliban will provide Iran with the excuse to send in its forces.

It would be a mistake to see the Taliban as militarily superior or even capable. The group rolled through Afghanistan not because of battles fought, but rather because of momentum gained. With the Taliban sputtering, any serious Iranian move will likely lead the Taliban to collapse, at least in the northern and western provinces if not throughout the entire country. Pakistan’s capability to rebuff the Iranians will be limited by its fear of what advantage the Indians may seek. That the Iranian regime will increasingly look for a way to distract its populace from its own economic mismanagement or rally them around the flag during a succession crisis only adds to the perfect storm. The United States may not endorse any Iranian move on the Taliban, but it will take an approach akin to the aftermath of the Vietnamese invasion of Cambodia: a pox on both their houses.

How will the Taliban end? Neither the West nor the Taliban need a crystal ball; they need only look at what happened to the Khmer Rouge.