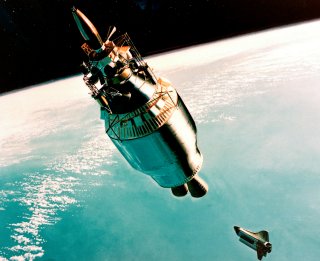 Missile defense technology has made staggering steps forward in recent years, and it is now poised for additional breakthroughs. Yet an even newer paradigm is needed to counter an emerging generation of threats that includes hypersonic weapons, high-speed multiple re-entry vehicles, and advanced countermeasures that fly alongside intercontinental ballistic missiles (ICBMs).

Now, hypersonic missiles travel so quickly along the boundary of the earth’s atmosphere that it is nearly impossible to develop a continuous “track” as they transit from one radar aperture to another. Recognizing this, the Pentagon is moving quickly to launch new constellations of high-tech, networked satellites for the specific purpose of establishing that continuous track and strengthening the layers of missile defense.

Accomplishing this requires non-line-of-sight targeting and connectivity, high-speed data sharing, artificial intelligence-enabled information processing and transmission, and, perhaps most of all, the addition of new constellations of low and medium Earth orbit satellites to complement traditional geosynchronous, higher altitude satellites. Essentially, hundreds of new satellites need to go up to help “blanket” otherwise unreachable target areas and exchange threat track data quickly and accurately enough to ensure a targeting trajectory is not lost as a high-speed weapon transits from one field of regard to another.

The objective of a massive increase in satellites is not only to build in redundancy and resiliency but also to use breakthrough “throughput” speeds to cover more of the earth while networking large numbers of lower-altitude satellites to one another.

Some of the Pentagon’s industry partners are working with the military services to better enable and safeguard the ability of satellite constellations to instantly share data across otherwise unreachable areas of space or ground terrain. Raytheon Intelligence and Space, for instance, is working to pioneer a software-based product line able to multiply functionality with individual satellites, network satellites to one another, and enable high-speed data interoperability through a set of common standards and internet protocol.

“If you had a subsystem on every satellite, [and] it did everything that the sensor needed to do and everything the sensor processed … if you added them all up, this would be a monster satellite, it would not be a small satellite, nor would it be affordable,” Karen McConnell, executive director of  engineering at Blue Canyon Technologies, a Raytheon Technologies subsidiary, told the National Interest.  “So, we have a product line, we call it the Sentinel product line.”

With individual satellites able to use updated, common software to perform a wide range of otherwise disparate functions, there is less of a need to reconfigure hardware and separate satellites by the kinds of operations they perform. In this respect, Raytheon and Blue Canyon’s strategic approach to modernization aligns closely with the kind of “spiraling” Space Development Agency Directory Derek Tournear recently described to reporters.

“You don't have to carry the cost or the mass burden of having fully disparate systems. Obviously, you have the transmitters, and you have the sensor. In some cases, you have an optical or laser inter-satellite link. But the brains, which would be what we call our central product line, are specifically designed to do all three functions with nothing more than software. And that software can be changed literally within a fraction of a second—you can repurpose those to the next stage,” McConnell added.