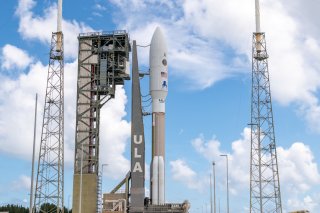 Evolving missile technologies continue to complicate missile defense efforts. Enemy intercontinental ballistic missiles (ICBMs) stream through space along with decoys, debris, and countermeasures. Hypersonic missiles travel so quickly along the boundary of the earth’s atmosphere that it is nearly impossible to develop a continuous “track” as they transit from one radar aperture to another.

Missile defense technology has made staggering steps forward in recent years and is now poised for additional breakthroughs, yet an even newer paradigm is needed to counter an emerging generation of threats that includes hypersonic weapons, high-speed multiple re-entry vehicles, and advanced countermeasures that fly alongside ICBMs.

Recognizing this, the Pentagon is moving quickly to launch new constellations of high-tech, networked satellites for the specific purpose of establishing that continuous track and strengthening the existing layers of missile defenses.

Accomplishing this requires non-line-of-sight targeting and connectivity, high-speed data sharing, artificial intelligence-enabled information processing, and transmission, and, perhaps most of all, the addition of new constellations of low and medium Earth orbit satellites to complement traditional geosynchronous higher altitude satellites. Essentially, hundreds of new satellites need to go up to help “blanket” otherwise unreachable target areas and exchange tracking data quickly and accurately enough to ensure a targeting trajectory is not lost as a high-speed weapon transits from one field of regard to another.

This is why the Space Development Agency is accelerating its plan to launch twenty-eight new satellites by 2025 through its $1.3 billion Tranche 1 Tracking Layer missile warning program. Contracts were just awarded to Northrop Grumman and L3Harris. Space Development Agency Directory Derek Tournear explained that the multi-pronged launch initiative, which will break up twenty-eight satellites into four different launches, is grounded in two key conceptual pillars. These are “proliferation” and “spiral development,” Tournear told reporters at the Pentagon, specifying that there is a need for hundreds and hundreds of satellites to operate in space while continuously gaining new capability every “two years” through ongoing spiraled development.

Tournear said that the Space Development Agency (SDA) is focused on “enabl[ing] beyond-line-of-sight targeting for our warfighters, to be able to get data for targets to them directly into theater anywhere in the world.” Tournear added that the SDA is working to do the same for “the new hypersonic glide vehicles that you see developed and -- and discussed a lot in the news,” adding that it will “be able to detect them, track them and then eventually, calculate an actual targeting solution for those advanced missiles and send that down to an interceptor directly in flight.”

The point with a massive increase in satellites is to not only build in redundancy and resiliency but also to use breakthrough “throughput” speeds to cover more of the earth in real time while networking large numbers of lower-altitude satellites to one another.