If Russia Invaded Europe, Britian Would Need to Bring Back This 1 Weapon 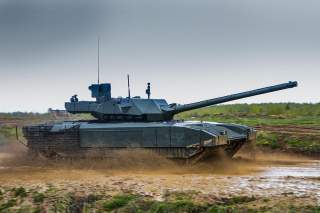 To defeat a Russian invasion of Europe, Britain needs to bring back a controversial weapon: the cluster bomb.

That’s the conclusion of a new report by a British defense thinktank, which finds the British Army so massively outgunned by Russian artillery that it may need to bring back cluster bombs, those bomblet-dispensing munitions that have proven devastating on the battlefield – but have cost many civilians their limbs or their lives.

“The UK must either retain a sufficient stockpile of anti-armor area-effect munitions and enough mass to suppress infantry with high explosive, or must reconsider its commitments to the Oslo Treaty, and procure cluster munitions,” concludes the study by the Royal United Services Institute (RUSI). Some 120 nations – including Britain – signed or ratified a 2008 international treaty that bans their use and calls for stockpiles to be scrapped. The significant holdouts are Russia – which has used cluster weapons in Syria – and the United States, where the Trump administration has rolled back previous restrictions on older bomblets without adequate self-destruct mechanisms. Older weapons have an estimated dud rate as high as 30 percent, which has left former battlefields such as Vietnam strewn with small, hard-to-see unexploded munitions.

However, RUSI maintains that the dud rate can be fixed. “It should be noted that the moral objections to the use of cluster munitions can be mitigated,” the report said. “It is possible to significantly reduce the dud-rate of munitions compared with those employed when the Oslo Treaty was signed.”

To be clear, the focus of the RUSI study – titled “The Future of Fires” – was not cluster bombs. Rather, it was the future of artillery firepower – or rather Britain’s lack of it. “The reason for this degradation in capability lies in Britain's reduction in high-end warfighting capabilities following the end of the Cold War and the subsequent three decades of counterinsurgency operations in which heavy artillery fire was largely unwarranted, as well as the ubiquitous availability of close air support (CAS) that rendered the logistical burden of artillery systems undesirable,” the study notes. “Today approximately 80 percent of NATO firepower is air delivered.

But there are two problems with relying on airpower, in RUSI’s view. First, the Russian military is very well-equipped with anti-aircraft missiles and guns. Second, there are only limited stockpiles of expensive precision-guided munitions such as smart bombs, which might be expended quickly if Russia, say, invades the Baltic States.

If Britain and NATO can’t rely on airpower alone, then firepower on the battlefield will have to come from the King of Battle: the field artillery, which itself has become more lethal with the advent of advanced sensors, data networking and smart artillery shells. The artillery has also traditionally been the Russian army’s strongest arm dating back to the Napoleonic Wars. “A Russian motor-rifle brigade contains an organic fires compliment of 81 artillery pieces, ranging from 152-mm and 203-mm self-propelled howitzers to 300-mm multiple-launch rocket systems (MLRS) and an electronic warfare (EW) battalion,” RUSI notes. “A Battalion Tactical Group (BTG), meanwhile, fields around 18 self-propelled guns, with access to brigade-level MLRS support. By contrast, the British Army has only two regiments of 24 AS90 155-mm, 39-calibre self-propelled howitzers. Owing to a shortage of transportation necessary for moving armor and guns long distances, in addition to the requisite combat service support (CSS), Britain is unlikely to be able to field its full fires compliment within a politically relevant timeframe in the event of a Russian incursion into the Baltics.”

Trying to match Russia howitzer isn’t feasible for Britain, which has slashed the size of its military  since the Cold War, while buying very expensive items such as aircraft carriers and F-35 stealth fighters. Facing massively superior Russian guns, British ground troops would be pinned down and unable to maneuver. Indeed, RUSI believes a future conflict in Eastern Europe would be World War I-style positional warfare, where the big guns were the dominant arm in 1914-1918.

This leaves Britain with a choice, according to RUSI. Spend much more money to buy precision-guided munitions, buy lots more artillery and artillery ammunition – or bring back cluster bombs.

“The moral objections to their use become somewhat moot in a high intensity conflict in Eastern Europe, where Russian and U.S. forces will employ cluster munitions liberally,” RUSI concludes. “Without appropriate munitions, British forces will simply be outranged, outgunned and thereby defeated in detail by Russian formations.”