Introducing the 1 Big Problem the Russian and U.S. Navies Both Share 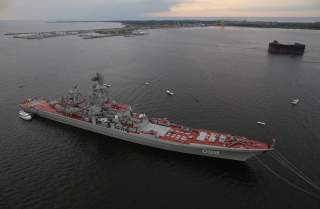 Last month, the Russian Navy was mocked because a shipyard accident resulted in the sinking of one of the world's largest drydocks—as well as a falling drydock crane that tore a hole in Russia's only aircraft carrier, the Admiral Kuznetsov.

Were it not for a dead shipyard worker and the wreckage now rusting under the Arctic, the accident would almost be humorous, the latest incident in the history of a Russian navy that always seems to suffer some misfortune, be it annihilation in battle or nuclear subs irradiating their crews.

But America is in no position to laugh. The U.S. Navy also has shipyard woes, creating maintenance problems that have hampered operations of the U.S. nuclear attack submarine fleet, according to a Government Accountability Office report. "The Navy has been unable to begin or complete the vast majority of its attack submarine maintenance periods on time resulting in significant maintenance delays and operating and support cost expenditures," the agency said.

As an example, the report cited the Los Angeles-class attack submarine USS Boise, which entered a shipyard for extended maintenance in 2013.

But due to heavy shipyard workload, the Navy delayed the start of the maintenance period. In June 2016, the USS Boise could no longer conduct normal operations and the boat has remained idle, pierside for over two years since then waiting to enter a shipyard.

In turn, the public shipyards are backlogged because they are being overtaxed beyond capacity. Another is shortage of dockyard labor. The navy aims to expand its public shipyard workforce from twenty-five thousand in 2007 to thirty-six thousand in 2020, but new workers will require time to gain proficiency.

As with most things that involve splitting atoms, maintenance issues with nuclear subs have major consequences. Not so much because of safety hazards, but rather the opposite: the U.S. Navy has a long, proud tradition of rigorous safety aboard its nuclear-powered vessels, and thus nuclear subs are barred from operating unless maintenance requirements are met. However, whether sunk by enemy action or sidelined because of a shipyard delay, a sub that can't sail isn't good for much.

Shipyard accidents happen, and they happen to commercial and military vessels. Which doesn't make the Admiral Kuznetsov's defeat by a drydock any less embarrassing. But dockyard woes are hardly unique to Russia, and the United States needs to clean up its own.

Image: An aerial view shows the Russian nuclear missile cruiser Pyotr Veliky (Peter the Great) moored on the eve of the the Navy Day parade in Kronshtadt, a seaport town in the suburb of St. Petersburg, Russia, July 28, 2017. REUTERS/Anton Vaganov​.