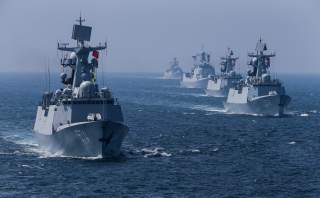 Tom note: Here is the fifth entry in our 10 Long March posts for 2018, the 6th most-read item of the year, which originally ran on April 1,  2018. These posts are selected based on what’s called ‘total engaged minutes’ (the total number of time spent reading and commenting on an article) rather than page views, which the T&P editors see as a better reflection of Long March reader interest and community. Thanks to all of you for reading, and for commenting–which is an important part of this column.

To:   Secretary of State Pompeo

I am writing this to you, after the fact obviously, to review the last several months of operations in the war none of us foresaw just two years ago.

Background and Discussion:  As you recall, we were in some disarray after the departure of your predecessor, Mr. Tillerson, and you asked all of us for our own take on the situation in Korea, especially with the appointment of Mr. Bolton coinciding as it did with your own appointment and the President’s initiation to meet with Mr. Kim.

As we all know, Kim met with President-Chairman Xi in March of that year and there was much speculation as to what passed between them.  Reality only became clear, however after the President’s earth-shaking meeting with Kim and President Moon of S. Korea in Seoul.  This was followed, not long after, by the Pyongyang Protocol in August, wherein all three leaders announced the demilitarization of the peninsula with the withdrawal of all US forces and the institution of a UN-led mission with a regime of inspections to ensure the dismantling of Kim’s nuclear weapons programs.

This — of course — stunned everyone, as did the Nobel Peace Prize shared by Kim, Trump, and Moon the following year.  But as you know, as these high profile events took place, China was on the move. We now know, through various sources, some from your former Agency colleagues, that China had long been displeased with Kim.  What we did not know was that Kim had reneged on an ultra-secret deal with his other enabler, Mr. Putin of Russia.

Kim had met secretly, even in secret from his own government, with Russian agents prior to going to Beijing, assuring them that he would do nothing to compromise Russia’s ongoing support for his nefarious programs, including his weapons program, which Russia was secretly paying for and assisting with.

It now appears he was duplicitous in the extreme. There is no way to understand what happened absent that conclusion. He turned right around and cut a secret deal with China.

Thus, when he publicly announced on CNN in November 2019 that he was stepping down as leader and asking China to enter the nation to secure it from the Russians, it shocked everyone.  Russia? We all shook our heads, how did that happen? They were not even on our radar scope.

When the NRO informed us of a Russian military build-up in the summer of 2019 in the Russian Far East Military District, we puzzled as to what was going on. Was Russia going to help the North invade the South as in 1950?  Except this time in the winter? Of course global warming has made that all a bit easier, but still, the weather was atrocious.

Imagine our shock, as well as yours, when Kim fled to Harbin on his special train at the same time as the PLA crossed the border in great numbers. We had completely missed the Chinese build-up, which they had been secretly doing since, it appears now, mid-2015. Slowly increasing their border forces and inserting PLA operatives into Manchurian cities and factories. The landing of the three Chinese Marine divisions (about which we knew absolutely nothing) south of the Imjin in North Korean territory was equally shocking.

However, it was the Russia invasion along the Korean-Russian border that surprised everyone most, and the use of the Russian submarine fleet in a guerre de course against the Chinese shipping.  Who knew that the PLAN was so ineffective at anti-submarine warfare?  Also, the cyber attacks that paralyzed Chinese C4ISR systems was that “cyber Pearl Harbor” that we have all been worrying about.  Thus the ham-handed Chinese efforts to turn their forces northeast and deal with the Russian incursion.

It was fortuitous that we had evacuated most US personnel from the peninsula before hostilities began and that the Russian actions, once they became apparent, allowed us to get a NEO quickly accomplished of as many Americans as would leave, although we estimate there are still 30,000 Americans still in South Korea. From our vantage point and that of our Japanese allies, who are helping us monitor military events closely along with our national assets, it appears that the Sino-Russian war will not end anytime soon.  It is still extremely dangerous for US shipping to attempt to navigate the declared Russian exclusion zones in the Sea of Japan, Tsushima Strait, and Yellow Sea. It appears, in fact, that the Russians intend to expand the war by making limited incursions into Manchuria and Mongolia, just as they did prior to World War II, or so my staff historian tells me. Our Agency chief of station has related that it appears the Russians are transferring their most seasoned combat forces in the Baltics and Ukraine to this theater, which perhaps explains the recent ceasefire the Ukrainian government signed at Khirkiv (Kharkov) with Putin’s representatives.

This new conflict, thus far conventional, is the greatest threat to world peace. It now appears the South Koreans are providing troops to the Chinese “coalition” battling Russian “aggression.” Certainly they are providing logistics and intelligence.

Recommendation:  You have asked for an assessment of our Japanese allies, both their intentions and their views. Their G-2 has informed the DAO that they intend to remain guardedly neutral. I am sure Secretary Gates is hearing the same thing through his channels. My recommendation is we do the same, remain neutral and continue to offer mediation for all parties, along with our efforts in the United Nations. This is the best course, I think.

Dr. John T. Kuehn is the Past General William Stofft Chair for Historical Research at the U.S. Army Command and General Staff College.  He retired from the U.S. Navy 2004 at the rank of commander after 23 years, serving as a naval flight officer, flying land and carrier-based aircraft.  He has taught a variety of subjects, including military history, at CGSC since 2000. He has written several books , including Agents of Innovation and A Military History of Japan:  From the Age of the Samurai to the 21st Century.