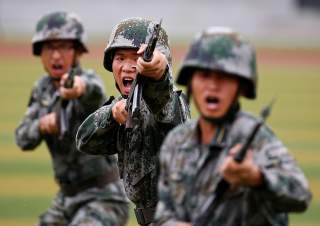 All 10 Airshow China exhibits over the past several decades have, as per their namesake, centered around showcasing the latest in Chinese aircraft technology. However, the Chinese People’s Liberation Army (PLA) has always taken these exhibits as an opportunity to unveil scores of small firearms and land vehicles that can be easily overlooked beneath the shadow of larger, more expensive arms weapons being announced at the same time.

One such weapon is the QN-202, a portable missile launcher system being developed by Wuhan Guide Infrared Co. Designed for individual use, the QN-202 consists of the launcher and a backpack that stores up to six missiles. The launcher weighs 1.2 kg, whereas a fully-loaded backpack is around 7.2 kg; considering the QN-202’s advertised capabilities, a combined weight of under 10 kg qualifies as relatively portable.

Precise measurements are not available at the time of writing, but images from Wuhan’s exhibit reveal the QN-202 launcher be of similar dimensions to popular military assault rifles like the AK-12. The weapon is in line with modern design principles, boasting a collapsible stock, pistol grip, and mountable scope. Target designation is done through a small, side-mounted controller module.

Wuhan told reporters that the QN-202 is designed for use in “fire-and-forget” mode. That is, the missile requires no further operator adjustment after being launched at the designated target at a range of 2,000 km. This would be the first of several compromises involved in making a weapon this small and light, as China’s bigger and heavier Red-Arrow 12 anti-tank missile launcher has twice the maximum effective range of 4,000 km.

Wuhan did not elaborate on the QN-202’s optimal target types, but the size and weight of its missiles strongly indicates that they were designed to penetrate lightly armored vehicles. There is only so much stopping power that can crammed inside the QN-202’s portable frame, but its lack of reliable anti-tank capabilities is less of a shortcoming than a design choice to trade some firepower for increased mobility..

Other have noted the QN-202’s resemblance to Raytheon Pike missiles, which have the same range of 2,00 km but are mounted on a slightly smaller M320 Grenade Launcher. On the other hand, the QN-202 is much lighter and markedly more compact than the ENFORCER shoulder-launched missile system being developed by European manufacturer MBDA for a late 2019 release.

The QN-202 was exhibited alongside Wuhan’s other major Airshow 2018 product, the QN-506 tank support vehicle. Packed with a wide array of weapons, the QN-506 is especially adapted for close-quarters urban engagements like anti-terrorist operations. The QN-202’s portable, anti-light armor design points to a similar intended use-case as the QN-506. The QN-202’s single-operator design and lower set-up time than the Red-Arrow 12 is especially relevant in urban settings, where engagement ranges tend to be lower.

No manufacturing schedule date has been announced for the QN-202, so the missile launcher may undergo any number of changes before heading into serial production. Export plans for the QN-202 are currently unknown, but China’s previous record of arms transactions gives a good portrait of prospective buyers. Morocco, Sudan, and Yemen have purchased Chinese missile launchers in the recent past, as has North North Korea.