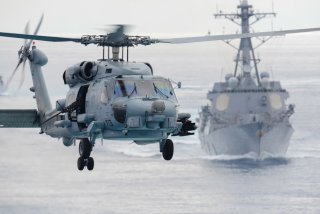 The U.S. Navy just released a report that identifies one of the most serious threats facing the American military today—and it is not Russia or China. Instead, the document identifies climate change as one of the pacing threats that the United States needs to adjust to and overcome.

“Climate change is one of the most destabilizing forces of our time, exacerbating other national security concerns and posing serious readiness challenges,” the U.S. Navy report explains. It adds that “our naval forces, the United States Navy and Marine Corps, are in the crosshairs of the climate crisis: the threat increases instability and demands on our forces while simultaneously impacting our capacity to respond to those demands.”

The warming of the planet is a serious threat to bases and military installations, particularly those located near the ocean. “Climate change increases risk, exposes vulnerabilities to our people, installations, platforms, operations, and allies and partners,” said Meredith Berger, assistant secretary of the Navy for energy, installations, and environment. “To remain the world’s dominant maritime force, the Department of the Navy must adapt to climate change: we must build resilience and reduce the threat,” she continued.

The Navy is tackling this challenge both by reducing its carbon emissions and by increasing the efficiency of vehicles that rely on carbon fuels. As virtually every ship and vehicle in the Department of Defense relies on carbon fuels, this will be a significant challenge. For example, the document states that the Navy has upgraded a third of its Medium Tactical Vehicle Replacement (MTVR) vehicles with higher efficiency engines. It is said that this upgrade “increases mission capability while reducing emissions.”

In addition to significant national targets, the Navy is also “committing to draw down an additional five-million metric tons of CO2 or equivalent pollution per year by 2027—roughly the equivalent of removing one million cars off the road.” The report continues: “The DON will also deploy cyber-secure microgrids or comparable technology to leverage carbon pollution-free power at our bases and installations to support critical missions.”

Budgeting for climate change won’t be easy, but it could pay dividends in light of the money the Pentagon would spend during future humanitarian disasters. Though climate change is by no means the most attractive opponent the United States military faces, it is one that will not go away any time soon. By tackling the threat head-on, the military is preparing itself for a future that is much less dependent on fossil fuels, if not carbon-free.