Iran and the Houthis Hold the Gulf Hostage With Environmental Terrorism 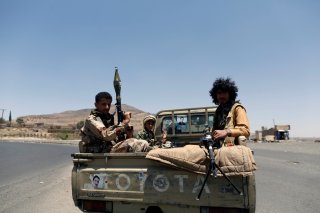 The fate of a rusting oil tanker anchored off the coast of Yemen will be decided by the Islamic Republic of Iran, whose local proxy seems content to oversee the largest environmental catastrophe in history. If the FSO Safer does indeed break apart, as experts fear it will, forty-eight million gallons of petroleum will spill into the Red Sea, destroying a vibrant ecosystem along with hundreds of thousands of jobs. And the ayatollahs will be to blame.

The ship is the property of the Yemeni state-owned oil company Safer Exploration & Production Operation Company (SEPOC). SEPOC used the tanker as a floating storage station until 2014, when the Iran-backed Houthi rebels seized Hodeidah and, in March 2015, captured the Safer and other SEPOC assets, including its $110 million operating budget. Since then, the old vessel has languished under Houthi control, unmaintained and leaking oil. Experts have described the Safer as a “floating bomb."

An explosion or break-up of the old vessel would deal a massive blow to the local environment, destroying coral reefs along with the 600 species of fish and invertebrates that live around them. The disaster would also affect 31,500 fishermen and 235,000 others who work in fishing-related industries. The pollution would imperil the health and livelihoods of millions and would likely shut down Hodeidah, Yemen's main entry point, which is already teetering on famine. The expected cost of the cleanup is nearly $20 billion, which is equal to Yemen’s entire annual GDP.

Aware of the global implications of a massive spill, the United Nations had taken the lead in trying to resolve the crisis, persuading the Houthis to permit inspection of the tanker and transfer the oil to a more seaworthy ship. Initially, the Houthis agreed, but they changed their mind just before international experts were about to board the vessel. And this wasn't the first time. In 2019, the Houthis agreed to allow UN experts to inspect the ship but shut down the mission before it even started. The UN even bought self-inflating oil containment booms to prevent the worst-case scenario, but the booms remain in their wrappers due to a breakdown in political negotiations with the Houthis.

Houthi leadership is not unaware of the ecological disaster that looms on the horizon. John Ratcliffe, the Yemen specialist in the UNOCHA, believes that Houthis may have a different understanding of how likely or how imminent a disaster is. But the Houthis do not act on their own accord—they are the agents of the Iranian regime, which has blocked the Houthis from reaching agreements with the UN on four separate occasions.

The regime in Tehran, obsessed with increasing its power in the region, actually has a perverse interest in blocking a resolution of the Safer fiasco. The ship serves as a convenient weapon against Saudi Arabia, Iran's chief regional enemy. At least one Houthi leader is on the record referring to the tanker as a military deterrent should Saudi-backed Yemeni forces try to retake Hodeidah, in which case the Houthis would sink the tanker. The Saudis, all too aware of the cataclysm that would follow, have factored this nightmarish contingency into their war planning. An offshore oil spill would wreak havoc on Saudi Arabia's tourism infrastructure and water desalination plants along the coast. The Saudi king and some other senior officials expressed concerns that the Kingdom should prepare for the sabotage of the Safer, or the Houthis’ “nuclear bomb.”

That the ayatollahs would use the threat of an environmental disaster as a weapon of war is not as outlandish as it sounds. Bio-terrorism is not new to the Middle East. In 1991, Saddam Hussein created the largest oil spill in history when he released over eleven million barrels of crude into the Persian Gulf to stop the United States from coming to the aid of Kuwait. The oil spill polluted over 800 kilometers of coastal waters, killed thousands of seabirds, and poisoned the water column for years. The Iranians themselves have supported bio-terrorism, with their Houthi proxies launching missiles at Saudi Arabia's al Shaqeeq water desalination facility in Jazan Darb.

But even without bioterrorism, the Safer remains a crucial weapon in the Iranians' arsenal. In the past, they have tried to leverage the tanker's status to end the embargo on Yemen. The Houthis have, on various occasions, conditioned inspections of the tanker on the cessation of U.S. weapons sales to Saudi Arabia and the latter's blockade of Yemen. Farsi media interviewed a member of the Houthis’ Supreme Political Council who warned that if the Houthis’ demand is not met, “the UNSC, UN and Saudi Coalition should be held accountable for the breakdown of the ship and the potential environmental disaster it may cause.”

If the Safer breaks apart, it will be the fault of the Houthis and their masters in Tehran alone. To the extent the Biden administration remains publicly committed to negotiating with the ayatollahs, the safe disposal of the ship and its contents should be a prerequisite for any further discussion. This environmental timebomb is an issue that goes beyond politics.

Farhad Rezaei is a Senior Fellow at the Philos Project.