What Will a New Presidential Council Mean for Yemen? 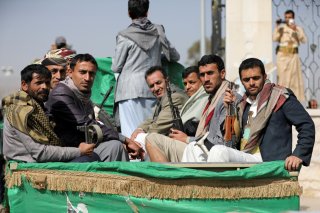 Is a resignation from a powerless government still considered a resignation? That is the question that Yemenis are asking about Abdu Rabbu Mansour Hadi’s recent and not unexpected resignation as president, a role that he held for the past decade. More than half of his presidential tenure was spent in exile in Riyadh, where he and his administration have gradually lost local legitimacy and trust from a Yemeni population that has endured militant rulers, aerial bombardment, and a humanitarian crisis of epic proportions. The formation of a post-Hadi interim presidential council is not without historical precedent and has the potential to be the harbinger of political rapprochement between the conflict’s warring parties.

Before submitting an official resignation, Hadi, likely at the behest of his Saudi minders, was first forced to depose his vice president, Ali Mohsen al-Ahmar, whose appointment in 2016 amounted to an effective insurance policy for Hadi’s tenuous presidency. It was precisely al-Ahmar’s well-known affinity with Yemen’s Islah party, which espouses an Islamist political agenda, that ensured Hadi’s longevity. At least while al-Ahmar was the alternative, Hadi could rest assured that he would not be assassinated or forcibly removed from power under pressure from his Saudi or international supporters. With al-Ahmar out of the transition picture, Hadi’s resignation and the establishment of a presidential council became an inevitable reality.

Hadi’s resignation and the formation of a presidential council come in the aftermath of a recent ceasefire between Houthi militias in Sana’a and the Saudi coalition, which included the partial reopening of Sana’a airport and the lifting of a blockade that has contributed to widespread shortages across the country. Coupled with the ceasefire was Saudi Arabia’s announcement of the allotting $3 billion in direct economic aid and an additional $300 million for humanitarian aid programs, for which Saudi Arabia was already the largest donor. Both the ceasefire and the potential for open dialogue between Saudi Arabia and Houthi representatives were made possible by Omani efforts to reach out to a wide spectrum of Yemeni political groups and provide a neutral space for Houthi participation. In fact, Omani delegates were some of the few openly welcomed in Sana’a in 2021, and they have maintained a dialogue with the Houthis since 2015 as part of Oman’s strategy of preventing the spread of violence across the border and establishing Oman’s role as a regional mediator. Saudi Arabia’s decision to force Hadi’s resignation, however, was not made out of political expediency, but rather out of political desperation.

In 2019, Hadi and the Saudi coalition were faced with declining political prospects in the southern Yemeni port city of Aden, which had been envisioned as an alternative national capital for the return of Yemen’s exiled government. Hadi was met with armed hostility in Aden both from local Yemenis who resented his policy decisions and alliance with Saudi Arabia as well as from groups of southern separatists who refused to, once again, fall victims to dominant northern politics. The Southern Transitional Council (STC), a political and military group supported by the United Arab Emirates, emerged as a serious contender for the political support of Yemen’s southern populations. Recognizing this reality, Saudi Arabia oversaw the signing of the Riyadh Agreement in November 2019, which constituted a power-sharing agreement between Hadi and the STC. While the Riyadh Agreement succeeded in mitigating armed tensions between Hadi’s supporters and the STC, it failed to form a viable government in south Yemen.

As Hadi’s legitimacy became further mired in a tense political battle in Aden, Saudi Arabia and the UAE were forced to contend with an even more destabilizing force. Iranian support for the Houthi movement, which has increased gradually since 2015, reached new heights with drone and missile strikes on oil facilities in both Gulf countries. Images from the March 2022 missile attack on an oil depot in the Saudi port city of Jeddah ahead of the Formula 1 Grand Prix were front-page news around the world, turning a popular media event into a source of great embarrassment for the Saudi monarchy.

In addition to announcing a ceasefire, a face-change in Yemen’s internationally recognized government was a necessary measure to demonstrate a post-Hadi path forward. Although the council is led by Rashad Muhammad al-Alimi, a stalwart of the Hadi government, there are four members of the eight-person council who mark a potential turning point for Yemeni political representation. Sultan Ali al-Aradah, the governor of Marib, has recently gained a great deal of public recognition for his leadership in the defense of the oil-rich, strategic city of Marib in the face of a continued Houthi offensive. The addition of Aidarus al-Zoubaidi, the leader of the STC and Hadi’s main rival for political power in southern Yemen, effectively merges Yemen’s government with the STC, a triumph for the failed Riyadh Agreement. Added for both family name recognition and as a testament to his military success is Tareq Saleh, a nephew of former Yemeni president Ali Abdullah Saleh who commands one of the most effective fighting forces in Yemen, consisting of remnants of his uncle’s republican army. Lastly, as a testament to the geographic inclusiveness of the council, Faraj Salmeen al-Bahsani, the governor of Yemen’s eastern Hadramawt region, was added to ensure that Hadrami’s autonomous tendencies do not further fracture the country. This means that the 50 percent of the presidential council that has joined the government in exile brings not only a great deal of popular support among Yemenis, but also essential on the ground legitimacy that was lacking under Hadi’s leadership.

Announcing the creation of a presidential council—essentially a conglomeration of anti-Houthi leadership from all sections of the country—does not presuppose the emergence of a representative and nationalist government. Each member of the council brings his own political agenda, which in many cases conflicts directly with one another. Yet there is historic precedence for the success of Yemeni presidential councils, especially in the aftermath of otherwise intractable civil wars.

In 1967, after five years of a costly civil war in North Yemen, the country’s president, Abdullah Sallal, was overthrown and replaced by a presidential council that was representative of the conflicting voices within the republic and led by Qadi Abdulrahman al-Iryani, a universally respected religious judge. The 1960s civil war, fought between northern tribal supporters of the deposed imam and a new republic in Sana’a, echoes the current conflict, albeit two generations later. Iryani and his council eventually brokered a compromise in 1970 between the religiously minded northerners and the urban republicans, forming the core of the Yemeni state that remained in existence until 2014. Although Iryani was overthrown in 1974 and replaced by military leadership, his presidency marked the first and only civilian leadership in modern Yemen and remains the administration upon which all others are compared. Three successive presidents from military backgrounds, including Ali Abdullah Saleh, formed their own rudimentary presidential councils, which were staffed by party loyalists and lacked any significant role. South Yemen, the first and only Arab Marxist state, was founded in 1969 on the backs of a presidential council that sought to coalesce conflicting political, ideological, and regional divisions. The last presidential council before the most recent iteration was the unity presidential council formed in 1990, which consisted of equal representation for north and south Yemen. Although the 1990 council played an essential role in unifying the two Yemens politically, it collapsed in 1993 following post-election tensions.

Yemeni presidential councils have been important political bodies during transition periods, either following a coup or after the creation or unification of a new state. The current state of affairs in the Yemeni government certainly meets this criterion of either unifying the disparate factions in the country or creating a new governing body that could purport to represent Yemeni national interests in future negotiations with the Houthi leadership. Although the current presidential council appears representative of multiple geographies and political constituencies, there is no clear leadership, at least not on the level of Qadi Abdulrahman al-Iryani. The success or failure of the post-Hadi political entity will ultimately depend on the council’s ability to find a council president who enjoys the respect of all political factions, including the Houthi movement.

Asher Orkaby is an Associate Research Scholar at Princeton University’s Transregional Institute and a Fellow at the Woodrow Wilson International Center for Scholars.