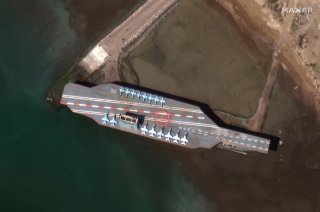 The Islamic Republic’s “Elite” Revolutionary Guard Corps Navy (IRGC-N) had vowed that it would sink a mock-up of an American aircraft carrier in its annual naval exercises, and they reportedly succeeded—but the carrier sank in the wrong place. Intended as a propaganda stunt to prove that the IRGC-N possessed the capability to sink a real carrier, the recent drill has become somewhat of a laughable show of military ineptitude.

As for the “carrier” itself, it is really just a large-scale mock-up built on an elaborate target barge, and more importantly, it is completely incapable of landing or recovering aircraft. The faux carrier—based loosely on the U.S. Navy’s Nimitz-class—was previously “sunk” in February 2015 “Great Prophet IX” exercises, which took place near the Iranian naval base at Bandar Abbas. It was targeted with a range of offensive equipment including swarms of fast attack craft, anti-ship missiles and ballistic missiles.

The barge, which has very little solid structure to actually strike or damage, was raised and subsequently repaired earlier this year so that it could go through another round of attacks. From a distance, the Iran mock-up resembles the American carriers but lacks the lifts, masts and notably weapons stations. Moreover, the scale is way off, and the fact that bulls-eye was painted on the center of the flight deck sort of ruins any semblance of authenticity, but it was likely painted to serve as an aiming point for the Fateh-110 guided missiles.

Naval News had previously questioned the military value of the exercises as the barge is far from an accurate reproduction of a real carrier and wouldn’t hold up damage the same way as a real carrier. Clearly it has been meant more as a propaganda tool than for actual training.

Now even that may have backfired in the most spectacular fashion.

The barge was used as a target on July 28 as part of the “Prophet Mohammed 14th” war games, where it was once again circled by speed boats and hit with other weapons. Initially, the target barge remained afloat—as target barges will tend to do. But then it was reported this week that the faux carrier was seen on satellite images to be capsized and listing at about 90 degrees. It apparently began to sink whilst it was being towed back to Bander Abbas, so whether this could be considered a successful demonstration of Iran military hardware or a failure may depend on one’s point of view.

However, as H. I. Sutton, writing for Forbes noted, “The location of the sinking will likely create a serious headache for the Iranian Navy and IRGC-N. It is just outside the harbor entrance to Bandar Abbas, near to the main approach channel.”

The water in the channel is just forty-five feet deep, so the barge has become a serious shipping hazard, and Iran lacks the serious salvage capability to handle this quickly or efficiently. Perhaps this can be another learning lesson or training exercise for the IRGC-N—how to salvage a faux carrier.