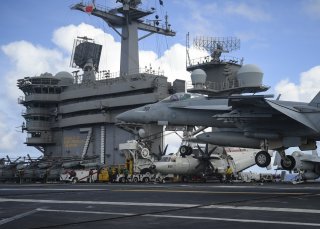 Currently, a dozen nations around the world have aircraft carriers and it should be no surprise that the United States has more carriers than any other nation and almost more carriers than the rest of the world combined. The list of carrier-capable nations among U.S. allies and partners includes Great Britain, France, Australia, Brazil, Spain, Italy, Japan, Thailand and India.

These include China’s two carriers, including the older Type 001 Liaoning and it first domestically built carrier Shandong; Russia's Admiral Kuznetsov, which is technically speaking the sister of China’s Liaoning as both were built in what is now Ukraine at the end of the Cold War. The Russian craft isn't considered a very reliable carrier, however, and as The National Interest has previously reported the cost to maintain it keeps rising.

However, Russia has a carrier. Another potential adversary doesn’t—and instead of looking towards how it could build one, Iran is instead continuing to find ways of destroying a U.S. carrier.

In 2013–2014 the Islamic Republic built a large-scale U.S. Navy aircraft carrier, which it used in dramatic fashion in its February 2015 “Great Prophet IX” exercises, which took place near the Iranian naval base at Bandar Abbas.

The faux U.S. carrier was hit by missiles, rockets and even an explosive boat and, of course, the whole thing was filmed and posted online. It wasn’t exactly what could be called an impressive display. In fact, it was a bit underwhelming given that the carrier doesn’t shoot back and the results actually look more like a low budget war movie.

Iran might have better spent the money calling in experts in CGI to simulate it on a computer!

But apparently Iran wants to do it again, and earlier this year began repairs on the faux carrier. However, it is really just a barge mocked up to resemble a U.S. Navy’s Nimitz-class carrier, complete with fake aircraft on the flight deck—albeit not the type of aircraft one would expect to find on any carrier.

That is just the beginning of the problems with Iran’s simulated carrier. As H. I. Sutton reported for Naval News, the results are “fleeting” at best.

From a distance, the Iran mock-up resembles the American carriers but lacks the lifts, masts and weapons stations. More importantly, the scale is completely off. While the barge is still quite long, it is only about two thirds the length of a Nimitz-class carrier and about half the width. Most notably is the fact that a bulls-eye target has been painted in the center of the flight deck. It has been suggested that this could serve as an aiming point for the Fateh-110 guided ballistic missiles, the same type believed to be used in the attack on U.S. forces at Ain-al-Asad airbase and Erbil in January.

The missiles are believed to have an anti-ship capability, and these may have been used in the 2015 exercises against the faux carrier. But it should be remembered too that the carrier wasn’t destroyed—at least not enough that it was able to be repaired for another go. While the drills are rather one-sided, it shows Iran’s intentions and even a slice of its capabilities.