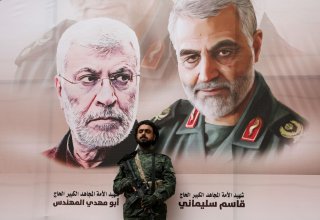 The self-help business offers a litany of so-called “rules” of negotiation, numbering anywhere from three to fifteen. Slight deviations aside, a common, albeit obvious, theme among these lists is understanding the other party. Harvard Business Review first advises to do “the background homework… understand[ing] the interests and positions of the other side…” Wharton-bred thinkers agree; so does LinkedIn. On one of the most troublesome international negotiations, U.S. officials are consistently failing to do their homework. The United States is stubbornly clinging to terms to which the other party, Iran, will never agree.

Policymakers on both sides of the aisle continue insisting that Iran end its “malign activity,” a punchy reference to the regime’s support for proxy forces in the Middle East and South Asia. Given its proxy network’s far-reaching success, ending its “malign activity” would be patently irrational for Iran. Rather than including the proxy network in the Iran nuclear deal, the United States would be better off addressing Iran’s nuclear program in isolation, and dealing with Iran’s proxies separately. The United States should limit the nuclear deal to Iran’s nuclear program, rather than contort the agreement into a catchall for all the things it dislikes about Iran.

The 2015 Joint Comprehensive Plan of Action (JCPOA), commonly known as the Iran nuclear deal, intended to limit Iran’s ability to build a nuclear weapon in return for sanctions relief. While the agreement also named Iran’s human rights abuses and terrorist activity, then-President Barack Obama generally ignored Iran’s regional proxies in pursuing the deal. Since former President Donald Trump withdrew from the JCPOA in May 2018 and reimposed sanctions on Iran, Tehran has incrementally breached tenets of the deal. Thus far, Iran has exceeded the stipulated uranium stockpile limit, installed advanced centrifuges in excess of the amount established in the deal, and resumed uranium enrichment at the Fordow enrichment facility.

President Joe Biden has expressed his desire to return to the JCPOA. Since his campaign, he specifically denounced Iran’s malign activity, i.e., its regional proxies in the Middle East and South Asia. It remains to be seen if he, like Obama, will separate this behavior from the JCPOA. He will likely contend with the Iran hawks who slammed Obama for being “naive,” even “duplicitous,” agreeing to “the worst deal ever.”

In a sense, though, the JCPOA’s critics are the naive ones. The expectation that Iran could cease support for its proxies betrays a profound misunderstanding of the Islamic Republic and its foreign policy. This misunderstanding is so seductive that it enjoys the distinction as one of the few areas of bipartisan consensus.

Iran’s proxies serve several purposes for the regime, but their foremost function is defense. The Middle East Institute’s Alex Vatanka describes this strategy as a “forward defense” doctrine, which assumes Iran should “fight its opponents outside its borders to prevent conflict inside Iran.” Sandwiched between antagonistic Sunni-led states and, of course, the “little Satan” of Israel, Iran discovered decades ago a way to protect its national security from behind enemy lines. These proxies allow besieged Iran to punch above its weight from Lebanon (Hezbollah) to Afghanistan (the Fatemiyoun Division). According to Iran’s logic, by targeting their adversaries, these proxies will deter attacks on Iranian soil both with striking displays of force and a degree of plausible deniability.

These proxies range from militia groups to shadow governments and operate with varying degrees of military effectiveness and political influence. At the core of this proxy network lies Iran’s Islamic Revolutionary Guard Corps-Quds Force (IRGC-QF), the extraterritorial arm of Iran’s most powerful armed forces branch. This “Axis of Resistance” has proven deeply problematic for the Sunni Arab states, Israel, and the United States.

Despite crippling sanctions on Iran, these proxies continue to wage a protracted war on Saudi Arabia, targeting key oil infrastructure with drones and missile attacks. They are killing U.S. service members and contractors in Iraq and launching missile and rocket attacks on Israel. The Trump administration’s maximum pressure strategy, while certainly damaging to Iran’s economy, has not appreciably limited its powerful proxy network. Over the past few decades, Iran has developed largely self-sufficient proxies with indigenous military capabilities. Hezbollah, Iran’s most effective proxy, maintains a substantial revenue stream from independent sources around the world, including a vast transnational criminal enterprise. In spite of, and perhaps because of, efforts to keep Iran down, its proxy network remains a sturdy bulwark against its enemies.

And so, Iran’s proxies, like its foreign policy generally, prioritize defense. While the Sunni Arab states (and their chief benefactor, the United States) often depict Iran as an aggressor, the regime has not conducted an aggressive war since the mid-eighteenth century. As for Iran’s direct military engagement, its principal opponent since 2011 has been the Islamic State of Iraq and Syria (ISIS). Since its 1979 Revolution, Iran has fought various Sunni and Kurdish domestic insurgencies—also defensive. Iraqi dictator Saddam Hussein, not Iran’s Ayatollah Ruhollah Khomeini, initiated the Iran-Iraq War (although the latter’s revolutionary rhetoric against the Baath Party surely fueled the flame).

Iran will not surrender what it considers a critical defensive measure. As for its nuclear program, however, Tehran has displayed a willingness to negotiate, i.e., entering the JCPOA in 2015 and complying with its terms until a year after the U.S. withdrew. Approached narrowly, a renewed Iran nuclear deal is possible. An Iran nuclear deal with the explicit goal of restricting Iran’s civilian nuclear enrichment program can satisfy virtually all parties directly and indirectly involved. The Sunni Arab states and Israel have a vested interest in preventing a nuclear-armed Iran. Indeed, Saudi Arabia has already expressed the intent to obtain a nuclear weapon if Iran develops one. Iran, for its part, desperately needs sanctions relief to salvage a severely contracting, though not collapsed, economy.

Keep the nuclear deal just that—a nuclear deal. As for Iran’s proxy network, the United States ought to maintain the tried-and-true measures at its disposal. Americans across the political spectrum express little appetite for continued involvement in the Middle East. The past three U.S. presidents have made similar campaign promises to end America’s “forever wars.” While Biden’s recent air strike targeting Iran-backed militia groups in Syria suggests otherwise, the United States has an ally in the region far more committed to neutralizing Iran’s proxies.

Israel has been engaged in a literal proxy war with Iran for several decades, targeting Hezbollah and Hamas (also Iran-backed, despite being Sunni), Iran-aligned militias in Syria and Iraq, and Iranian nuclear facilities. The Israeli Air Force has established itself as Iran’s most formidable adversary in the region. Despite the chorus of American voices, especially on the political Left, demanding a reexamination of the “special relationship,” Israel remains the best means of offshore balancing against Iran. Those demanding a withdrawal from the Middle East—many among the aforementioned chorus—should consider standing by Israel. Its faults aside, Israel has proven singularly effective at challenging Iran’s regional hegemony. While censoring the Jewish state may remain politically expedient, curbing military aid seems rather unwise given its critical role in achieving our most important strategic aim in the region.

Perhaps the United States will maintain, even heighten, its kinetic activity in the Middle East, contrary to the retrenchment rhetoric. If last month’s air strike provides any indication, Washington may decide that Iran’s proxy forces are fair game—at least, when they target U.S. forces.

Merely telling Iran to completely overhaul its foreign policy will likely fail. Facing Iran’s proxy forces demands not rhetoric, but kinetic action. More pressingly, injecting this rhetoric into the JCPOA will hamper our efforts to achieve another important end—preventing Iran from obtaining a nuclear weapon. Put the politics aside for a moment and keep both efforts on separate tracks.

Lindsay Gabow is an active-duty captain in the U.S. Army. She has experience analyzing issues in the Middle East, as well as the U.S. Southwest Border and Mexico. The views expressed are her own and do not reflect the official position of the US Army or the Department of Defense.

Image: A Houthi militant stands by a billboard with posters of Iraqi militia commander Abu Mahdi al-Muhandis and Iranian military commander Qassem Soleimani during a rally by Houthi supporters to denounce the U.S. killing of both commanders, in Sanaa, Yemen January 6, 2020. Reuters.

Will Israel Go to War Over Hezbollah's Precision-Guided Missiles?