Iron Dome: Here Is How Israel Protects Itself From Hamas In Gaza 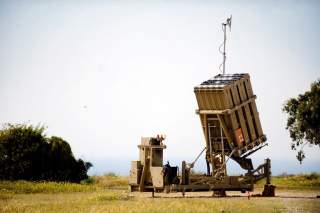 The Iron Dome is Israel’s most effective defense system against short-range projectiles. The deployment came after Palestinians in Gaza started launching incendiary balloons and kites over the border fence, causing fires in southern Israel.

The IDF portrayed the move as precautionary after a ceasefire with Hamas had been agreed to on Saturday, July 14. However, that ceasefire did not hold, with skirmishes continuing and escalating further on July 20.

According to left-leaning Israeli daily, Haaretz, almost 200 such projectiles had been fired into Israel before the now-failed ceasefire was reached on Saturday night. The report added that “a number of rockets” were fired from Gaza in the early hours of Sunday and some Palestinians continued launching the “airborne firebombs” later that day.

“Yesterday’s attack was not strong relative to the Air Force’s capabilities,” a senior Israeli Air Force official told Haaretz of the retaliation on Saturday.

Still, the same official warned: “We have prepared a large number of targets that will surprise Hamas, targets such as terror tunnels, the Beit Lahia battalion in which we attacked some 20 buildings and a multi-story building in the center of the Gaza Strip that served Hamas as a training facility with a tunnel underneath it.”

It appears that as the situation in Gaza escalated, the IDF decided to strike several of those targets, with the conflict continuing late into the night of July 20. Hamas fired three rockets into Israel, two of which were shot down by Iron Dome. That missile defense system, first introduced in 2011, is Israel's last line of defense in intercepting rockets, missiles, and mortars close to the ground.

It has claimed considerable success especially in Israel’s conflicts with Hamas in 2012 and 2014. According to Raytheon, which helps make one of its interceptors, Iron Dome is the “world’s most used missile defense system, intercepting more than 1,500 targets with a greater than 90 percent success rate since being fielded in 2011.”

Israel has also long maintained a force of American-made PAC-2 batteries with Israeli upgrades. Like the Iron Dome, the PAC-2 system is mobile. It relies on the AN/MPQ-53 radar system to provide detection and targeting information. PAC-2’s range is more than sixty miles with a maximum altitude of twenty miles, according to America's Missile Defense Agency.

Israel has used its Patriot system in many different conflicts dating back to the Gulf War in 1990 and 1991. More recently, it has used the PAC-2 to target enemy drones, including ones from Syria and Hamas. (The original Patriot systems were designed to deal with aircraft.)

However, the Patriot’s effectiveness against missile threats has been questioned especially in dealing with Saddam Hussein’s SCUD missiles in the first Iraq War. These shortcomings have led to upgrades being made in the form of the PAC-3 systems, although Israel hasn’t purchased any itself.

Instead, Israel has poured more resources into the Arrow missile defense system, which is more advanced and has a greater range than the PAC-2. This has relegated the PAC-2s to the second line of defense if the Arrows fail.

The Arrow family of systems (Arrow-1, Arrow-2, and Arrow-3) were jointly funded by Israel and the United States and developed by Israel Aerospace Industries (IAI) and Boeing. Arrow-1 was more of a demonstrator system with the first Arrow-2 system being declared operational in 2000.

According to CSIS’s Missile Threat project, the Arrow-2 “consists of a two-stage interceptor with a solid propellant rocket motor booster that flies at Mach 9.” Unlike many of the systems America now relies on, the Arrow-2 doesn’t use hit to kill technology, instead relying on a directed fragmentation warhead.

The United States and Israel are also teaming up in developing the much more advanced Arrow-3 missile defense system. This system targets warheads while they are still in space. It reportedly has a slant range of 1,500 miles and intercepts targets 62 miles in the sky. Some have suggested it could eventually be an anti-satellite weapon.

As Michael Peck has noted, the Arrow-3’s range is so great that the United States and Israel cannot test its limits in the Mediterranean region. Instead, they are planning to bring it out to Alaska to see its full capabilities.