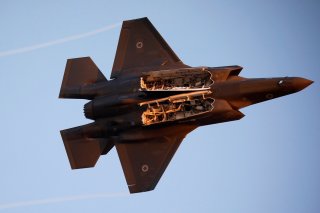 For the first time, Israeli Air Force F-35s practiced alongside the Italians, the United States and the UK in a joint exercise dubbed Falcon Strike. The F-35 jets flew to Italy. “Together with our allies, we soar higher every day,” said the Israeli Defense Forces.

The important drill took place on June 6. It involved elements of the U.S. Air Force, the Royal Air Force, the Italian Air Force and the Israeli Air Force. Six F-35s flew to Italy to participate in the two-week exercise. It was the furthest the Israeli F-35s have flown for a drill, according to various reports. Israel’s F-35 jets have increasingly taken part in F-35 joint drills. The F-35 jet is a unique fifth-generation aircraft and Israel’s Adir version has special qualities. Israel initially sought to acquire fifty of the aircraft, but may eventually procure seventy-five of them. It has had two squadrons since early 2020. It continues to receive several of the advanced Lockheed Martin airplanes every year.

In 2020 the United States and Israel did three joint drills with F-35 jets, called Enduring Lightning. These were regional exercises in which the U.S. planes flew from Al Dhafra Air Base in the United Arab Emirates to Israel. These were important and unprecedented drills because they took place during the coronavirus under difficult circumstances where pilots often couldn’t meet face-to-face with their counterparts from other countries. Now, with the Israel Defense Forces completely vaccinated and the rest of Israel doing well in relation to the coronavirus, exercises can return with more international partners.

Israel also used F-35 jets during the Blue Flag drill in November 2019 alongside various planes from the United States, Greece, Germany and Italy. A total of 725 personnel came to Blue Flag.

Israel sending its F-35 jets abroad represents a turning point for the country. Israel has sometimes said that its high level of operational activity precludes participation in numerous drills far from home. Israel in fact had just completed a conflict with Hamas when the Falcon Strike drill was about to begin. The drill comes amid anniversaries for D-Day in Europe and the fortieth anniversary of the Israeli raid on Osirak, the Iraqi nuclear site in 1981. These anniversaries are important because for Israel the raid on Osirak showed how Israel could use F-16 jets and F-15 jets to fly far from home over international borders to carry out an airstrike on a strategic threat. D-Day represents a day of liberation for western Europe. Israeli advanced fighters flying in European skies is symbolic.

The drill in Italy sought to showcase the capabilities of the F-35 jet, an aircraft packed with sensors that sponge up data, and an aircraft that works best with other fifth-generation aircraft. The pilots continue to focus on Iran as the main regional threat, according to reports in Israel.

The drill involved air superiority and air-to-ground operations, simulating air defense threats. British F-35 jets flew with the Israeli F-35 jets during one part of the drill. It was important for Israel to practice alongside NATO members and see how the air forces communicated during a joint drill. “This exercise has great value in our ability to deploy the F-35 jet to remote bases and allows us to increase the squadron’s performance” a senior Air Force official said according to The Jerusalem Post. “The drill is a fertile ground for mutual learning between the forces, focusing on the Adir system.”

A variety. Of the planes took part, including Israeli F-16 jets from the 116th Squadron and the Israeli G550. In all, around thirty Israeli planes went to Italy. The Italians brought their F-36 and KC-767 refuelers. Eurofighter Typhoons and helicopters were used as well, along with drones and UK F-35s and A330 refuelers. Israel’s air force is in the midst of purchasing new helicopters and refuelers to replace aging transport helicopters. Israel chose the CH-53K King Stallion in February after long deliberation. Budget issues have taken their toll as has Israel’s lack of a government and four recent elections, putting off many long-term plans.

The drill in Italy shows that some things are getting back on track after more than a year of the world enduring a deadly pandemic. The increased importance of using fifth-generation F-35 jets together is part of a wider U.S. F-35 alliance system. This may one day involve the UAE as well, which hopes to acquire F-35s and advanced drones. With a new peace in place between Israel and the UAE the ramifications for the air forces of the Middle East and the Mediterranean loom large.