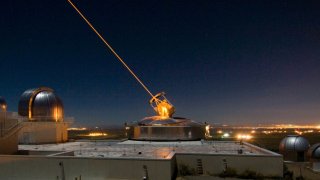 Decades after President Ronald Regan devised a “Star Wars” program that laid out a blueprint for constructing a laser weapon defense system, this dream has made significant headway toward becoming a reality in Israel.

The Israeli Defense Ministry recently conducted a test using a laser beam defense system to shoot down a series of targets. The system, which Israel called the “Iron Beam,” is revolutionary.

“This is the world’s first energy-based weapons system that uses a laser to shoot down incoming UAVs [unmanned aerial vehicles], rockets & mortars at a cost of $3.50 per shot. It may sound like science fiction, but it's real.”

A video embedded in the Tweet showed the laser demonstration, which targeted a surface-to-air missile; a mortar; and a small, unmanned air vehicle at an undisclosed location in Israel’s Negev desert.

Benny Gantz, Israeli’s defense minister, explained that “every effort is being made to make the system operational as soon as possible and enable an efficient, inexpensive, and innovative protection umbrella.”

Though Iron Beam is an Israeli military project, the country’s defense ministry conducted research and development in tandem with Rafael and Elbit Systems, two of Israel’s defense industry heavyweights.

The system is all-electric and more economical, the Israeli Prime Minister noted, compared to the Iron Dome's rocket interceptors. While many of the rockets that target locations in Israel cost in the hundreds or low thousands of dollars, Iron Dome’s interceptors cost between $50,000 to $100,000 each.

Still, Iron Beam is in its infancy. Though Israel hopes to develop a 100-150 kW solid-state laser, the system will initially use paired lasers to achieve higher on-target energy. And whereas the Iron Dome system requires regular magazine resupply, an all-electric system could offer greater magazine depth over a traditional interceptor system.

The United States is also interested in the system. Last year, Rafael announced that it would work in conjunction with Lockheed Martin, an American defense company, to “explore opportunities and technology implementations” for Iron Beam.

Scott Arnold, Lockheed’s vice president for integrated air and missile defense, said that the company is “looking forward to further developing our partnership with IAI [Israel Aerospace Industries] and working together to deliver a state-of-the-art solution designed to address the critical gap in short and medium-range ground-based air defense.”