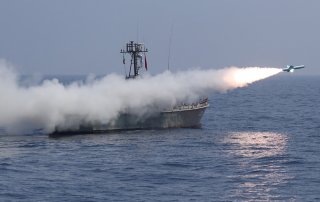 Iran regularly calls for, and threatens, the complete destruction of Israel, but what could it actually do about it? Apart from the obvious risk of some kind of future nuclear attack, and an ongoing threat of terrorism, what kind of actual threat would Iran pose to Israel? Clearly, Iran does not have comparable airpower, given that Israel is already expanding its operational fleet of fifth-generation F-35 jets and operates a formidable Air Force. Iran would have trouble getting in a position to launch missile attacks into Israel, which might not succeed in reaching targets anyway given Israeli defenses.

Does this mean Iran’s best hope for actually destroying Israel would be to launch a ground invasion? Provided, of course, its force could get into position to attack without first being destroyed from the air.

While Iran does, at least on paper, appear to have a larger ground force, particularly when it comes to tanks and armored vehicles, that does not in any way mean that its land force would in any way be equivalent to Israel. Globalfirepower’s 2021 military assessments, for instance, list Iran as having thirty-seven hundred tanks compared to Israel’s sixteen hundred tanks. However, having two thousand more tanks than Israel does not by any stretch ensure military overmatch, as sheer numbers of tanks may prove to be much less of an advantage should a smaller tank force be equipped with vastly superior sensors, weapons, computing and targeting. This may well appear to be the case with even a cursory look at how Israel’s well-known and highly regarded Merkava tanks would compare against Iranian upgraded Soviet-era T-72s. An interesting report in “21st Century Asian Arms Race,” states Iran has German-built Leopard tanks as well as Russian T-90s and even some Abrams. Iran’s first widely reported indigenous tank called the Farrar has emerged in recent years, a platform said to be based upon an upgraded Iranian T-72S chassis. The Iranian tank—reported to operate with an electro-optical fire control system, laser rangefinder and ballistic computer—would at least on the surface appear to most likely be vastly inferior to the Israeli Merkava.

There is some question about whether the Israeli Merkava is, in fact, the most advanced in the world. It can carry infantry or injured soldiers, leverage a rear exit hatch for dismounted operations or safety escape, and, perhaps of greatest significance, its main gun tube can itself fire anti-tank missiles. The Merkava also has top-attack missiles potentially useful for attacking helicopters and other targets potentially out of range for a standard tank shell. What much of this amounts to is simply that even if it operates as many as two thousand fewer main battle tanks compared to Iran, Israel may indeed operate a vastly superior land force. During the Gulf War’s famous tank battles, for example, U.S. Abrams advanced thermal sights were able to detect, find and then help destroy Iraqi T-72 before they were in range to even be detected or seen by Iraqi tanks. Therefore, large numbers of Iraqi tanks were disproportionately destroyed by far fewer Abrams armed with long-range, high-fidelity targeting sensors.

Iran is also reported to operate about one thousand more armored vehicles than Israel. Iran is listed in the Global Firepower 2021 assessment as having eighty-five hundred armored vehicles, compared with Israel’s seven thousand. Again, any size deficit is likely to be less consequential, unless the technological capacity were in any way comparable. While a lot of details regarding any kind of particular technical comparison may not be available, the advanced technologies built into the Israeli Merkava might make it seem unlikely that Iran has vastly superior infantry carriers and armored vehicles. Furthermore, without superior tanks able to break through the proactive barriers or defensive configurations of an Israeli force, any Iranian advance might be less likely to succeed.

Meanwhile, virtually all of this would of course rely in large measure upon an ability to establish any kind of air superiority, something that would be necessary for Iran to achieve before it could even get close enough to try to attack Israel on the ground.