Israel Is Putting Together a New Elite Special Ops Unit 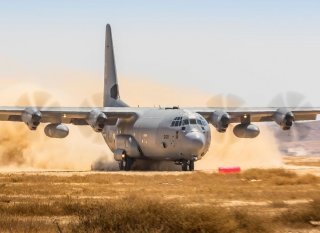 Israel’s is creating a new special forces unit as part of the Israeli Air Force. Called the 7th Wing, it will include ground forces and serve operations needs in a variety of theatres the Israeli Defense Forces said on Sunday, July 12. The unit was inaugurated at Palmachim, the sweeping base set in the dunes overlooking the Mediterranean, a site rich in history for Israel drones, satellite launches and other important military activity over the years.

Major General Amikam Norkin, commander of the IAF, was present for the unveiling of the unit and an unnamed “Colonel O” was presented as the commander of the new unit. Israel has been going through a military transformation in recent years, part of a multi-year program called “Momentum” that is supposed to make the IDF more lean and tech-savvy, combining more units with more capabilities. This is important because over the last twenty years Israel’s IDF has faced several challenges. After fighting the Second Intifada, the army was found lacking during the 2006 war with Hezbollah and many tactical failures were noted.

Later in wars with Hamas in 2009, 2012 and 2014 the army and air forces improved their ability to work closely together and conduct more precise and deadly war operations with few casualties on the home front. However, the future war that Israel faces is likely against a complex and determined enemy linked to Iran. Elements of this conflict have already percolated to the surface. Israel has carried out more than 1,000 airstrikes on Iranian targets in Syria. Israel-Hezbollah tensions grew last year after Hezbollah claimed it discovered an Israeli drone in Beirut and fired an anti-tank missile across the border. This year Hezbollah cut five holes in the northern border security fence after an airstrike on a Hezbollah vehicle in Syria. Recent months have seen allegations of cyber-attacks and also tensions after the mysterious explosion at Iran’s Natanz nuclear facility.

Israel calls the concerns about a conflict with Iran a “third circle” threat and has dedicated a headquarters unit to the threat as part of the Momentum plan. In addition, Israel is increasingly practicing with its F-35s in joint drills with the United States and others.

According to the IDF, the special new Air Force unit was established due to the “operational needs and changing and growing threats in the various theatres. The wing was established as part of the IAF force design aimed to increase the operational effectiveness of the units. The wing will function as a complementary and a unique component to IAF activities through special depth, routine and emergency operations.”

“The establishment of this wing brings into action a conceptual and organizational change…The 7th Wing will gather various units, including the ‘Shaldag’ unit, Unit 669, the Forward Landing Unit, a dedicated intelligence unit and an assigned school for Special Air Force (SAF) combat troops,” stated the IDF. This means the 7th Wing will combine a plethora of other elite units under one umbrella. This sounds a bit like what Special Operations Command (SOCOM) or other similar combinations bring to the table in terms of abilities.

Israel says this organizational change will allow high-quality and close operational cooperation between the special units and extensive learning to enhance their capabilities. “The troops serving in these operational units will integrate into positions at the operational headquarters and the IAF’s instructions headquarters. Thus, they will fulfill the wing’s designation as part of routine and emergency processes of the IAF,” the IDF says.

Major General Norkin praised the ambitions behind the new unit. He linked it to regional changes and other challenges. “This is the change that requires us to adapt ourselves and to prepare better for the future challenges. After a long and detailed staff process, which underlies operational vision and at the end of the process - there is an enhanced capability that will make our special forces more effective during combat, more influential in terms of air superiority, and part of any process or scenario that takes place in the IAF,” he said.

The announcement of the new unit comes at a unique time for Israel. Facing the Iranian threat and tensions, reports indicate Israel has asked the United States to move up delivery of KC-46 tanker planes. A deal for Israel to acquire the new Boeing plane has been in the works for years and was advanced this March, but Israel appears to want them sooner, according to a report at Israel’s Channel 12 and The Jerusalem Post. The KC-46 has been plagued with problems and the U.S. Air Force is slowly acquiring them. Reports indicate there are already around thirty in service in the United States. The reports of Israel’s request were interpreted as due to the Iran tensions, although the delivery of two planes by the end of 2020 or early 2021 would not seem to necessarily change radically the abilities of the Israeli Air Force.