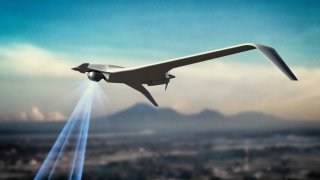 Israel continues to develop new defense technology amid the Covid-19 crisis. In late May and early June Israel showed off a new lightweight surveillance device called MicroLite and carried out a missile drill that saw a missile slam into a target at sea. The two technologies, surveillance and missiles, are those that Israel may use in future conflicts, including the looming conflict with Iran and its proxies. Both are also being shown to foreign militaries.

Rafael Advanced Defense Systems showed off its new developments in surveillance, especially smaller lightweight surveillance sensors that can be put on drones and other aerial vehicles. This is called Wide Area Persistence Surveillance which enables a user to investigate and designate targets. In this concept, the desire to put more intelligence in the hands of units on the ground, including smaller units, is being realized. Rafael, which now owns a piece of the Israeli drone manufacturer Aeronautics, showed off an imaging system that can be placed on smaller lightweight drones such as the ones Aeronautics makes.

In the example Rafael showed a UAV can track an area and build a 3D model with what it called MicroLite, which can be mounted on drones. It contains an infrared detector that can look at millions of pixels and also a scanning system that covers the viewed area with updates several times a second. The better performance is achieved with optics that enable simultaneous scanning in infrared and daytime imaging. In the example that Rafael showed, the UAV hovers over a city and looks for suspicious threats.

One of the issues that militaries face today is that with so much more technology the challenge is not that technology can’t keep up with what militaries need, but that militaries can’t sort through all the information being absorbed. Modern fifth-generation warplanes, like the F-35, sponge up so much data that it can’t all be sent to every ground station and analyzed in real time. It requires algorithms and will eventually require more artificial intelligence to analyze and deal with. Rafael is part of this digital makeover of the IDF, in programs linked to the Momentum five-year plan which sees new technologies being incorporated  to push intelligence to frontline units.

MicroLite and this new technology tracks movement and stores data while processing the images and manages the streams of live video. It has an application that allows a “back in time” screen to look at an area at a different period in the past to compare with what is happening in real-time.

Alongside lightweight hi-tech surveillance, Israel aerospace Industries also completed a dual operational firing trial of its Long-Range Artillery Weapon system (LORA), which is a kind of precise ballistic missile. The missile was fired at sea at a distance of 90km and 400km. It struck a small target floating in the water and looks like the missile could be showcased as a potential ship killer or used to decimate other maritime targets.

Israel had to keep the operators in a kind of sterile team, something Israel’s IDF has been dealing with over the last months. Naval units, for instance, have been kept on their ships. Israel didn’t want operational readiness to be degraded by Covid-19. The LORA missile has been tested in the past but Israel wanted  to continue to work with the system and work with its capabilities. Boaz Levy, Executive Vice-President of IAI and General Manager of the Systems, Missiles and Space Group, said the complex trial demonstrated the advanced capabilities of the strategic missile system. He thanked Israel’s Navy, Air Force and Ministry of Defense of assistance with the trial.

IAI developed Israel’s Arrow 2 and Arrow 3 missiles, as well as satellites and Barak 8 missiles. IAI’s ELTA subsidiary makes the ELM-2084 radar for Israel’s Iron Dome system that has seen such success detecting incoming threats, such as missiles, mortars or drones.

Israel’s attempt to keep producing new weapon systems and precision technology, from UAVs to missiles is part of the country’s desire to remain one step ahead of enemies in the region, particularly Iran and Iranian-backed proxies. Relative quiet has been seen on Israel’s borders in the last month but there are concerns that the new government’s desire to annex land in the West Bank could lead to conflict with the Palestinians. In addition there have been numerous small border incidents along the Lebanon border where Hezbollah is active.