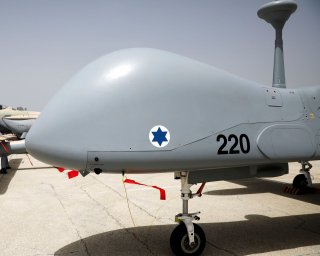 In mid-July, Israel announced that a new light-weight drone, known as a “loitering munition” because it explodes when it hits a target rather than returning to base, was now operational with the Israel Defense Forces. This is the Hero-30 system by UVision, and it is one of many new drone and counter-drone technologies that Israel is working with. The last month has seen new advances in drones at sea, on land operations and in methods to combat drones using special sights for rifles.

Israel has long been a leader in unmanned aerial vehicle (UAV) technology going back to the late 1970s when Israelis produced some of the first successful drones to be used to counter threats on the Egyptian and Syrian frontlines. Later these systems performed well in 1982 battles against Syrian air defenses, producing surveillance imagery. But the field of UAVs has changed rapidly in the last years as more countries built sophisticated systems. These include not just the array of American drones, such as the Reaper, but also new Turkish Bayraktar drones being used in Libya and Chinese exports of UAVs that Beijing claims have similar capabilities to their U.S. competitors.

Israel’s niche today in drone technology is two-fold; it continues to make series of tiered systems from smaller drones to high-altitude surveillance UAVs, as well as pioneering counter-UAV technology. For instance, Israel’s Iron Dome missile defense system can be used against drones. Israel also has experimented with a variety of laser systems to shoot down drones. In addition, Israel is building a higher number of small loitering munitions. These weapons, sometimes called “kamikaze drones,” are basically a flying warhead that can return to base if necessary, but whose real mission is to hover over a target, wait for an opportunity and then be used in precision strikes. Unlike a cruise missile or smart bomb or anti-tank guided missile, these weapons can hover and wait for an enemy to appear in range.

The Hero-30 drone is one example. UVision CEO Major General (retired) Avi Mizrachi said on July 13 that the Hero-30 meets the requirements of today’s new battlefield doctrines. That means it provides more precision with less collateral damage. These types of drones are also easy to fly, meaning platoons or smaller units can use them and deploy them from backpacks, rather than needing specially trained Air Force pilots controlling them while sitting far away in a metal box. The Hero-30 has now successfully been used in combat operations with various Israeli Defense Forces (IDF). Israel doesn’t say where this has happened, but recent years have seen Israeli airstrikes in Gaza and Syria. Israel doesn’t elaborate on the kinds of munitions used and Israel officially says it doesn’t use armed drones the way the United States uses Reapers or Predators. Loitering munitions, because they are smaller, are not in the same category of armed drones the way larger medium-altitude UAVs are.

Another place that small drones are needed is to aid naval surveillance. While large drones like Israel’s Heron TP or the U.S. Global Hawk can conduct surveillance for days at high altitude, there are many times when smaller drones are needed to confront threats at sea. Israel’s Elbit Systems recently put its Skylark C maritime model onto an unmanned surface vessel known as a Seagull. Skylark is usually launched with a rail or catapult. This is likely the first combination of an operational unmanned platform with another unmanned platform. That means combining drones with drones, something that future warfare planners have talked about, but which has not been accomplished. In this case, it is about combining a USV, or naval unmanned surface vehicle, with a flying drone. The boat is basically what you could use for harbor patrols or to inspect suspicious vessels. Putting a drone on it enables the boat to conduct one mission while the drone can inspect things further afield and potentially provide information to yet another air force asset that could neutralize the threat.

The idea of combining unmanned systems into swarms or as “loyal wingmen” is being rapidly tested in many countries. How to best use drones on the battlefield, pairing them with vehicles or ships or other planes, is part of sorting out how wars will be fought in the future. Whether this is about hunting down insurgents, which drones have been used for, or protecting critical infrastructure such as a port, or using drones against near-peer enemies who also have drones, is the big question for militaries. For instance, kitting out several unmanned boats gives a country the ability to have them on constant patrol along a border, using a USV only to check on suspicious activity that is confirmed to be a threat. It also means, in the unlikely chance a threat is laden with explosives, an inspection can be done without sending manned ships into harm’s way. An unmanned boat with a drone, for instance, could potentially have helped the USS Cole prevent the 2000 attack off Yemen. Israel’s Elbit says the new UAV-USV combo can aid in electronic warfare or with sonar or anti-submarine warfare missions. The options seem to be endless so long as commanders and navies are willing to try new approaches.

In addition, in June, the Israeli company Smart Shooter announced that the U.S. Army had selected it “as one of a handful of approved counter-small unmanned aircraft systems (C-UAS) solution providers.” Smart Shooter can be integrated onto rifles and enables detection, tracking and engagement of a target with one shot precision. Basically, it enabled the user to choose and lock-on a target so that when an enemy small moving drone comes back into the sight, the rifle will fire precisely. “In recent years drones and UAV have become a persistent threat over the battlefield, enabling opposing forces to gather critical tactical intelligence,” Michal Mor, the CEO of Smart Shooter, said. The fire control offered by this system helps stop these kinds of threats. CENTCOM Kenneth McKenzie said recently that these kinds of small, cheap drone threats are a major issue that needs to be addressed. “It’s harder to defend against it than it is to create those things. So I think at an operational level, that’s a worrisome thing.”

Smart Shooter technology is one way to provide bases and soldiers the ability to take down small drones easily. Smart Shooter says it has “a unique technology that makes it possible for every battlefield element to be connected with every other battlefield element.” The United States has been practicing with the system for more than a year. It was seen in Syria’s Tanf garrison in May, but photos posted to the Defense Visual Information Distribution Service of the U.S. military appear to have been taken down now. Nevertheless, other images of tests of the system at Beale Air Force Base can be found from August 2019.

These three systems, adding drones to unmanned ships, employing backpack-size attack drones with smaller units, and giving soldiers more options to shoot down small drones, is all part of the approach that will see future forces with more technology at their fingertips. These are all small, light-weight systems. The Hero-30 only weighs 3 kg and the Skylark C weights 15 kg. With ranges to 10-40km, these are tactical weapons. They function as add-ons, along with the Smart Shooter, giving new capabilities without requiring units to go through a huge amount of new specialized training. That increasingly looks like the future.