Israel Won't Sell AWACS to China, But Agrees to Sell Them to India 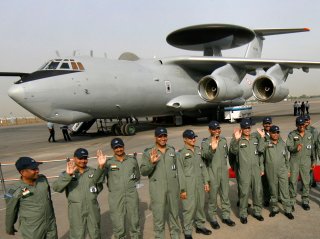 Politics has always made for strange bedfellows and among the strangest have been those between the State of Israel and the People’s Republic of China (PRC). Israel was the first country in the Middle East to recognize the PRC as the legitimate government of China, but it wasn’t until 1992 that China established normal diplomatic relations with Israel. Both countries have been known to largely ignore each other’s reported human rights violations, but yet China is one of the few nations in the world to concurrently maintain warm relations with Israel and Palestine as well as the Muslim world at large.

The two countries’ military cooperation goes back to the 1980s, and Israel ranks second only to Russia as a weapons system provider to China.

“Israel can be a partner, a junior partner, but a perfect partner for China in the development of a variety of technologies that change the way we live, how long we live, how healthy we live − in every area,” Israeli President Benjamin Netanyahu said during a visit to China in 2017. However, those warm relations could now be cooling.

Israel has refused to sell its Phalcon Airborne Warning and Control System (AWACS) aircraft to China—but Jerusalem has announced that a long-stalled deal to sell the early warning aircraft to India is still now moving forward. India has previously acquired three of the aircraft in 2004 and the Indian cabinet has sought for years to approve two more.

According to Harinder Mishra, a journalist living in Jerusalem, the long-stalled deal is a part of a $2 billion worth purchase agreement between India and Israel. This could occur under an agreement in which India and Israel would jointly manufacture arms supplies and defense equipment. Mishra reportedly said that the AWACS in service with the Indian military have been used to monitor Pakistani airspace and this includes the land around Islamabad and Rawalpindi.

India is especially interested in obtaining more of the aircraft as Pakistan currently operates around ten of the AWACS and those have given it an advantage that New Delhi cannot allow to continue.

It was also reported that twenty years ago Washington applied pressure on Israel to nix a sale of its AWACS to China, as it was out of fear the spy plane could give China a strategic advantage over America’s AWACS aircraft in any conflict involving Taiwan.

That acted as a serious dent in Israel-China ties, and while Beijing has tried to establish closer ties, the government in Jerusalem cannot afford to weaken its ties with the United States. Now the fact that Israel will sell the aircraft to India but not to China could likely further cool the relations between Jerusalem and Beijing.

One other factor to consider is that China already operates its own AWACS, which it developed after the 2001 deal to buy the Israel platform was canceled. As a result, it is unclear why it was interested in the Israeli version, except to have access to foreign military technology.

The Chinese have also developed a new AEW plane, which some analysts have warned could make their aircraft carriers even more deadly.

The U.S. Navy developed the AWACS concept as part of Project Cadillac at the end of World War II. It combined British development of the cavity magnetron—the same technology that today heats up your dinner in the microwave—with American development of electronic relays that extended the range of radar beams.