Israeli Drones are Exploding in Popularity Across the West 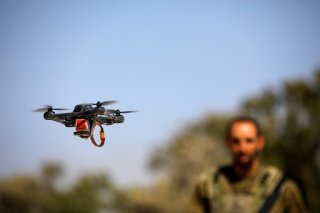 In Israel’s early years the country marked its defense milestones through the purchase of arms from Western countries. Arms from Czechoslovakia came to Israel as the state was being born in 1948 and French arms deals helped secure Israel in the 1950s. Today the situation is reversed and Israeli defense technology is playing a major role throughout Europe, the United States, and into Canada where Israel’s unique innovations, from air defense to precision targeting capabilities, surveillance, and improvements on the digital battlefield, are needed by hi-tech militaries.

This revolution has taken decades to reach fruition and Israel faces difficult competition from large Western defense giants. In some cases, Israeli companies have partnered with these companies, such as Rafael Advanced Defense Systems working with Raytheon. In other cases, Israeli defense systems, such as the Spike family of missiles, have become so ubiquitous they have a European version. Israel competes at the highest levels for contracts, from Poland’s tank destroyer program to the Spanish army seeking new software-defined radios.

On December 21, Israel’s Elbit Systems said its new StarLiner drone would be selected by Transport Canada for maritime environmental protection missions in the arctic and to conduct aerial surveillance. The StarLiner is unique in that it is tailored to fly in civilian air space. Drones were once considered the province of militias and they gained controversy as America used them on armed missions in places like Pakistan. However, today’s large drones, like the StarLiner which comes from the Hermes 900 line of Elbit, can be used for a plethora of missions. They can aid in search and rescue and also map things like deforestation. The sky is the limit in terms of drone potential. There’s no reason they couldn’t one day play a key role in fighting fires, using the latest artificial intelligence to plan and execute their missions. Arctic patrols would seem ideal for these unmanned systems.

Canada likes the Israeli drone. Minister of Transport Marc Garneau says that Canada is committed to protecting endangered species and the remotely piloted aircraft will help surveillance in far off rural areas. Adverse weather conditions make it so human pilots can’t fly often. Drones can do the job.

Israeli drones have also been used by Germany in lease agreements. Israeli drones have been used by other countries in Africa as well. In May reports indicated Israel Aerospace Industries would lease its Heron drones to Greece for maritime missions. This is necessary because there aren’t very many large surveillance drones doing maritime missions from Europe. A Global Hawk drone used by NATO was first based in Sigonella in Sicily in December 2019, illustrating how slow NATO and European countries have been to adopt advanced systems like the RQ-4D version of the Global Hawk.

While Spain is acquiring Elbit’s E-LynX software-defined radios, the country is also looking at Israel’s Netline Communications Technologies for an improvised explosive device jammer. Netline makes high-end electronic warfare systems. The company said on December 21 that it had completed an acceptance procedure for IED jammers for the Spanish Ministry of Defense. The system is called C-Guard RJ and is for vehicles.

At the same time, Elbit’s E-LynX radios are also being bought up by Switzerland in a contract worth $338 million. That procurement began last year. After three years of extensive technical and field evaluation, the company said in December that was awarded the deal. Across Europe, the same radio technology is being used to modernize army radios. Army communications has in some ways lagged behind civilians, who jog around with smartphones, because the systems need to be robust and secure. Years of testing and slow procurement means many militaries have not been able to keep up with the civilian world of new drones and gadgets. Terror groups such as ISIS have been able to use modern technology on the battlefield. Now with these kinds of Israeli innovations filling the niches that militaries need, the battle to keep armies as modern as possible is moving forward.

Israel’s Elbit also said in December that it is supplying the Dutch Ministry of Defense with XACT nv32 micro night vision systems. The Dutch also increased an order for more “digital soldier” systems which include radios and command and control technology. The concept is that soldiers need to be connected more on networks and with command and receive the latest intelligence. These network capabilities are technologies Israel has been developing in the last decade and which has been increasingly rolled out with frontline units. Israel’s Momentum multi-year plan calls for increasing these kinds of digital battlefield technologies to make for more lethal, precise, and fast combat pushing intelligence to frontline units faster.

Israel’s footprint is growing throughout Western countries. These also include deals to upgrade the Romanian Air Force to unique Smart Shooter technology that is used against drones, to new patents for Israel’s MS-Tech getting new patents for its big-data applications for homeland security in the United States.

The trajectory for Israel appears multi-layered in this technology realm. Israel makes smaller lightweight and precision systems that can often plug-in to what Western militaries need, filling a gap. That could mean systems to defend vehicles or the new unique masts that Israel helped design for submarines. It often involves electro-optics and using open architecture concepts that enable a kind of plug-and-play for inserting Israeli technology onto large platforms. Israel also excels historically at UAV and missile and targeting technology, as well as using artificial intelligence and algorithms to aid in surveillance. Israel learned this the hard way, needing to find terrorists and reduce collateral damage in war and defend cities against missile threats. Now that has global ramifications, not only for defense technology, but also for unique applications such as monitoring endangered species.