Israeli Upgrade Will Give the Navy's Super Hornets Pinpoint Accuracy 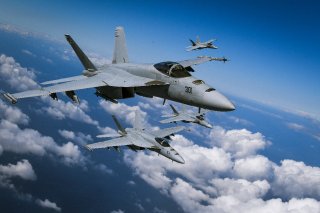 In a statement, Northrop Grumman explained that the first flight with the pod “demonstrated LITENING’s ability to rapidly add modern, upgradeable mission capabilities to the Super Hornet.”

It added that “the pod’s digital video, autonomous target tracking, and laser sensors will give Naval aviators an entirely new set of capabilities for operations over land and sea today, and the growth capabilities built into LITENING’s modular design ensure that the pod can evolve to meet changing requirements.”

Northrop Grumman also explained to The Drive more specifics about the targeting pod.

“It also offers an eye-safe laser mode for realistic training. The pod’s laser imaging sensors offer more accurate identification to overcome challenges to traditional IR imaging. After the mission, a full data recording of all sensor inputs is available for analysis. These capabilities will give Naval aviators enhanced and new capabilities for their missions."

A video published by Northrop Grumman overlying a harbor shows what the images from the LITENING ATP look like to the pilot and simultaneously shows infrared, narrow, and high-definition wide views.

Israel’s Rafael defense corporation developed the original LITENING I pod for the Israeli Air Force. However, the United States took note of the targeting pod and in the mid-1990s Northrop Grumman decided to further refine the targeting pod for use on American warplanes. The American refinements improved the targeting pod’s image processing capabilities, resulting in the LITENING II.

The original LITENING pod and its subsequent iterations have proven to be highly successful. Rafael claims that over 900 of their targeting pods have been sold to customers worldwide.

The U.S. Navy just received its first Block III Super Hornets last year. They are warplanes that incorporate modernizations that help mitigate the fourth-generation fighter’s radar signature, wider pilot displays, and greater networking and processing power. Thanks to one of the world’s most advanced targeting pods, the U.S. Navy’s Super Hornets will likely remain in service for many years to come.