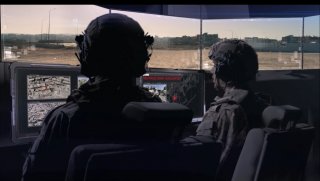 Over the past several years Israel has been seeking to revolutionize ground combat through a new type of armored fighting vehicle. The program, dubbed Carmel, was for years just a concept and kept under wraps as Israel’s three large defense companies competed to complete design concepts for the government.

Now the Israeli Ministry of Defense has said it selected Israel Aerospace Industries (IAI) as the prime contractor for the futuristic program. The Directorate for Defense Research and Development (DDR and D) in the Israel Ministry of Defense tapped IAI to “lead further development of technologies for the Carmel program,” a statement said on October 10.

“The goal of this program, which is conducted in cooperation with the IDF’s (Israel Defense Force's) Ground Forces and the Tank and APC (Armored Personnel Carrier) Directorate, is to significantly improve maneuvering capabilities,” Israel says.  The Carmel concept will be applied to current and future armored fighting vehicles and will include crew members in closed hatches, operating a range of autonomous and AI-driven platforms, the Ministry of Defense noted.

The system is designed to be autonomous so that the vehicle can find its own route over a landscape and also detect threats. It will acquire targets and likely use artificial intelligence and deep learning to help with automatic target recognition. These types of capabilities already exist and have been developed by companies like Israel’s Rafael Advanced Defense Systems. Israeli companies often work together on various parts of key defense projects. For instance, the Iron Dome system is made by Rafael but IAI makes the radar. Israeli defense companies are also working to kit out new Sa’ar 6 advanced warships.

On land, the Carmel concept will enable vehicles that may have only two crew members or be optionally manned. “With the Carmel’s innovative user interface, soldiers in the vehicle will be able to view the battlefield in several dimensions. They will receive intelligence, detect threats and acquire targets automatically, enabling them to effectively assess situations and make optimal decisions,” Israel’s Ministry of Defense says. The new Eitan armored fighting vehicles will be the first to be integrated into the pilot stage of the program.

Israel believes this is a groundbreaking program and it will influence countries and industries abroad. Israel already makes a variety of groundbreaking technology that is reshaping warfare. From Iron Dome which has been supplied to the United States to the Smart Shooter device for rifles to the new AI-assisted ARCAS system made by Elbit Systems, Israel is making a lot of technology that is changing the future battlefield.

IAI says it was chosen at the conclusion of a successful live demonstration of a two-man, closed hatches armored fighting vehicle (AFV). “IAI has developed and proven a combat concept in which an AFV, with closed hatches, is operated by a two-man man crew and can successfully cope with existing and future challenges on the battlefield,” the company noted in a statement.

“These capabilities allow the team to define, supervise and interfere only when there is a necessity or need, and enables to cover a wider area of concern while effectively meeting the challenges faced by the maneuvering forces,” IAI said. The success in this program will add to IAI’s other recent accomplishments, such as a partnership with Lockheed Martin on air defense.

The company’s president and CEO Boaz Levy also praised the project. “The central principles behind the company’s concept of land combat include intelligence gathering and acquisition of targets in the battlefield, conducted autonomously,” Levy added. “The Carmel solution, as demonstrated by IAI, brings to the world of land combat the concept of system of systems championed by IAI, and includes a combination of capabilities, systems, groundbreaking innovation and connection to the world of artificial intelligence as an additional strategic capability the IDF can use in the future battlefield. Carmel will enable complex ground operations with less risk to human lives, which will transform ground combat strategy as we know it today,” he said.

IAI notes that their system will include a unique command “brain” as well as using radars, SIGINT (Signals Intelligence), and electro-optics for situational awareness. It will have a lethality system that is in charge of classifying and prioritizing targets in real-time as well as an operating system that helps with mobility and enables team members to observe the battlefield in several dimensions. This is all part of the multi-dimensional way of war that Israel is rolling out under its multi-year Momentum plan. This involves also networking in advanced drones, F-35s, and other systems. Overall the Carmel concept may take years to fully realize its potential but as it plugs into other advanced systems, from the F-35s and Sa’ar 6 ships, it will showcase Israel’s ground warfare capabilities in the decades to come.

Image: An image of the inside of a Carmel fighting vehicle system. (Courtesy IAI)