Israel’s New War Plan: That Means F-35s, Iran and "the Campaign Between the Wars" 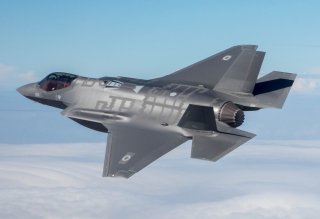 Israel is trying to change the way war is fought in the future. In the last year it has been gearing up for organization changes in the Israel Defense Forces as part of its Momentum plan. During an exercise in mid-July 2020, key commander from the 98th Division and Ground Forces commander Maj. Gen. Yoel Strick led a drill with a new “multi-dimensional” unit.

Multi-dimensional is the Israeli term for combining the abilities of different units, honing the best of what Israel has in both the infantry and its air force. This is “multi-branch” in that different elements that usually might operate on their own are combined. For instance, using ground forces, air force units like the 5th generation F-35, intelligence, and cyber defense together. The IDF says “the soldiers operated ground breaking abilities that were developed within the defense industry. These abilities and methods will be deployed by the maneuvering units of the IDF.”

In the recent drill the three air force squadrons, using F-16s and Heron drones, were brought together with an artillery corps unit to combine with ground units. New techniques using live fire were evaluated for the first time. “The technique includes attacking targets with a fighter jet which is operated by the soldiers on the battlefield in real-time. In addition, the soldiers trained in combat techniques that are related to the deployment of the Armored Corps and Combat Engineering Corps,” the IDF said.

This unit is one of many organizational changes taking place in Israel as the country prepares for a major future conflict. This is called the “campaign between the wars” and is Israel’s attempt to prevent Iran from establishing itself in Syria. It is also an attempt to prevent Iran from moving precision-guided munitions to Hezbollah in Lebanon. Israel has also been accused by Iraq of airstrikes last year, intended to reduce the threat of Iranian-backed militias there.

Israel has designated a special headquarters to deal with the Iranian threat, which Israel calls the “third circle” threat. This means that it is a faraway threat but that it nevertheless threatens Israel through asymmetric means such as ballistic missiles and drones. Iran also empowers tens of thousands of Shi’ite militias in Syria and has more than 700 IRGC members in Syria. There have been escalating tensions with Iran in the last year, including airstrikes that the Syrian regime blamed on Israel in Syria and Hezbollah threats of retaliation for the killing of an operative on July 20. One false move could lead to a wider conflict.

Israel must move quickly to update its military doctrine. It has created a new 7th Wing special operations Israel Air Force squadron that combines elite units as well as units that can do engineering work like carve out airfields in enemy territory and also those that do rescues. The idea is to put the best-of-the-best under one roof.

Israel’s new multi-dimensional unit is part of this reorganization that will see the reduction of heavy tank units, a new F-35 squadron and removal of a redundant air force squadron. “The unit is designated to fight in all battle fields and physical environments, according to its changing characteristics and challenges, while using a multi-branch and multi-dimensional maneuvering force, specializing in locating, exposing and destroying the enemy,” the IDF says.

The new drill was part of an annual exercise plan for the year of 2020. The commanding officer of the 98th Division, Brig. Gen. Yaron Finkelman, said that during the past year commanders have worked hard to ensure the unit fulfills its purpose. Now, as the new units come online and become operational they will combine the methods and abilities alongside coordination between ground, air, intelligence and cyber forces. “The 98th Division is proud to take part and lead the establishment and operative steps of the unit, as part of the effort to improve the ground forces' readiness for the next war,” Finkelman said.

The commanding officer of the Air Support and Helicopter Division, Brig. Gen. Noam Riff, also noted that the Israel Air Force is committed to the Multi-Dimensional Unit. He elaborated that the unit includes UAV operators, as well as special forces from the air force. The concept is to provide all the best assets of the air force for combat in urban environments, such as Israel will face in Lebanon against Hezbollah.

At the same time that Israel is rolling out these new units, it is also conducting new training for its various brigades by putting them through a hi-tech simulator designed by Elbit Systems, an Israeli defense company. This Brigade and Battlegroup Mission Training Center is designed to provide officers of a brigade the ability to carry out a mission in a virtual simulator, with thousands of entities on a virtual battlefield, like they would in the field but saving on costs and space. They can then compare notes with each other and with various air forces and other elements as to how they responded to threats. With the Givati brigade and an armored unit going through the simulations, Israel is trying to use this new virtual technology to hone the skills of commanders. Another eight units will go through the training this year and more next year, Elbit Systems says.

The concept here is to help officers utilize all the assets they have on the battlefield, such as UAVs and helicopters, in a battlespace that is increasingly networked, digital and using artificial intelligence. Looking at the big picture, with Israel’s new multi-dimensional unit, its 7th Wing and virtual training, the country is rapidly preparing for a whole new kind of warfare. With more intelligence and drones at the fingertips of frontline officers, Israel hopes to dismantle Hezbollah or enemy infrastructure rapidly and precisely with the most firepower brought to bear.